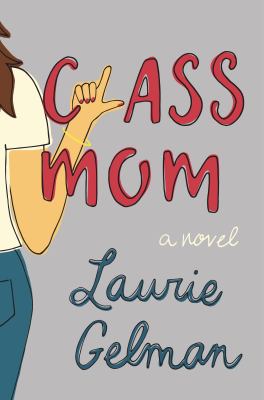 Have you ever been a class mom? These women(or men) serve as the teacher’s right hand person and handle a lot of the grunt work. My mom was a class mom multiple times for both myself and my younger siblings. I remember her organizing parties, meeting with teachers, volunteering in my classrooms, and organizing events for me all throughout school. She was always busy and I thought she pulled everything together effortlessly. When I was looking for a new book to read and saw Class Mom by Laurie Gelman in the catalog, I decided to give it a try because I was feeling nostalgic about all the work that my mom put in to my classrooms when I was younger.

Class Mom by Laurie Gelman is a hilarious romp into the life of Jen Dixon. Jen is married to Ron, who she continuously refers to as her ‘first husband’ much to his annoyance. Jen and Ron have an adorable five-year-old son named Max who is just starting kindergarten. Jen is not new to the school system as she has two older daughters, by two different men, who are now in college. Jen had a lively youth following bands around the country and the world. Her two daughters were born as a result of her carefree younger days. Jen raised her two daughters with some help from her parents and when she met Ron, her life seemed to fall together pretty perfectly.

Now that Max is starting kindergarten, Jen finds herself being prodded into becoming class mom for Max’s class. Nina, the PTA president and Jen’s best friend, keeps telling Jen that the new parents have a lot to learn from Jen’s expertise and experience. Jen thinks that’s all baloney and it’s just because she’s older than the other parents that Nina is asking her to be class mom. Regardless of those factors, Jen soon finds herself as the class mom to Ms. Ward’s new class of kindergarteners!

Jen’s tenure as class mom is full of hilarity, snarkiness, offensive, and uproariously funny emails and interactions. She holds nothing back in her emails to the other class parents and is sure to note specific response times to her requests. Jen is responsible for assigning conference times, finding field-trip volunteers, and doing whatever the teacher Ms. Ward wants her to do.  She soon finds herself as the middle-man between Ms. Ward and the other class parents. The interactions between Jen and everyone at Max’s school are ripe with hilarity from Max’s supersexy kindergarten teacher who has a very odd way of running her classroom, an old flame of Jen’s popping up as one of the parents of another student, a mother whose son is severely allergic to almost everything, and two moms who Jen can never seem to tell apart! Outside of Jen’s interactions at Max’s school, Jen herself is struggling to get in shape to do a mud run to make up for last year’s disastrous attempt, trying to figure out what’s going on with her two older daughters, and working to keep her relationship solid with her husband. This book was very entertaining. Definitely recommended.