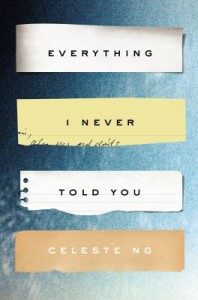 I love book lists. Give me a list of award books or a list of books you absolutely adored, and I will slowly make my way through the list until I have read them all. Today’s book is one I discovered on an award list. The title is Everything I Never Told You and is Celeste Ng’s debut novel. I first heard of Everything I Never Told You when I was tuned in to watch the Alex Awards online. The Alex Awards are an award given out by the American Library Association (ALA) to the 10 best adult books that have special appeal to teens. (This book has also been on numerous other lists and won another award. Check out Celeste Ng’s website for more information.)

Everything I Never Told You begins, “Lydia is dead. But they don’t know this yet. 1977, May 3, six thirty in the morning, no one knows anything but this innocuous fact: Lydia is late for breakfast.” After those simple, yet devastating, few sentences, Ng weaves together the story of a Chinese-American family growing up in 1970s Ohio. Each family member is outlined: the professor father James, stay-at-home mother Marilyn, older brother Nathan who is desperate to leave home, younger sister Hannah who seems to blend into the background, and the middle golden-child Lydia whose mother and father have placed all of their hopes on her shoulders, as well as several other members of the community. When Lydia’s body is found in the lake right down the street from their house, the entire family falls apart.

This book delves into the complex nature of the Lees: family, history, home, and the struggles we all make on a daily basis to understand each other and to find ourselves. 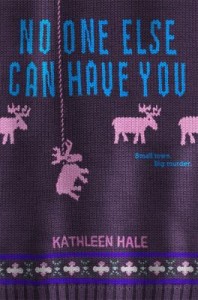 If that description caught your interest, check out No One Else Can Have You by Kathleen Hale. This book deals with similar concepts of love, loss, and the tragic and upheaving nature of death. This book takes place in the small town of Friendship, Wisconsin, where residents have been shocked by the discovery of high school student Ruth Fried’s body in a cornfield. Her best friend, 16-year-old Kippy Bushamn, finds herself trying to solve her best friend’s murder. Ruth’s mother has given Ruth’s diary to Kippy with the express instruction to redact the sexy parts. Kippy sets out to find out who murdered her best friend and discovers that in her small Midwestern town, everyone seems to have secrets.

This quirky murder mystery will have you following Kippy around as she emulates her idol, Diane Sawyer, to figure out who her best friend really was and what really happened when she died.

Bad Behavior has blocked 1492 access attempts in the last 7 days.