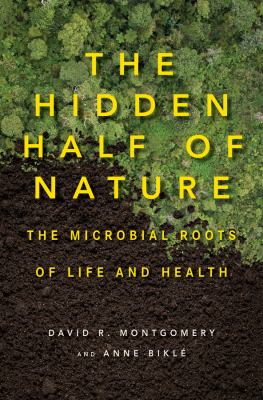 After reading Montgomery’s most recent book, Growing a Revolution followed by Josh Axe’s Eat Dirt, the parallels I had begun to see my separate explorations of regenerative agriculture and human gut health seemed to align beyond a shadow of doubt. Then I stumbled upon one of Montgomery’s earlier books, The Hidden Half of Nature, in which he explains the biological backgrounds and importance of the two similar systems.

Montgomery and Biklé go about transforming a backyard full of lifeless dirt into a thriving ecosystem, above and below ground. Through extreme composting, they mimic the natural buildup of soil via decaying matter on an accelerated time frame nature could never accomplish. It is when Biklé finds herself stricken with cancer that the couple decides to fortify their gut microbiome with specific foods just as they “fed” their soil to provide a hospitable environment for good microbes. Dietary changes ensue and we get a biology lesson on the digestive system that probably no one learns in school…yet.

The biology lesson was interesting but I admit to my mind wandering a bit during those parts. I’m not a scientist so I just need a broad picture of what I’m learning, not so much the details. It was fun to learn about Lynn Margulis, a rebel biologist who in 1970 first hypothesized chloroplasts and mitochondria originated from ancient bacteria. The segment on the discovery of penicillin and other antibiotics was also amazing history.

What I found most fascinating and frustrating is throughout the industrial revolution and rise of synthetic chemical fertilizers, there have always been scientists or farmers who have sounded warnings that went unheeded. These scientists or citizen scientists showed tests crops in which fertilizing with compost, crop rotation, and no-tilling yielded heartier and more nutritious plants. I think the hubris of the scientific age along with chemical companies’ grip on agriculture has effectively buried all of these voices of reason under a field of increasingly useless dirt.

The study of both soil and human microbiology is relatively new and exciting. It is terrible to learn the percentage of nutrients plants have lost since the use of synthetic chemical fertilizers, pesticides, and fungicides in the pursuit of greater yields. It’s no wonder people might have weight problems while eating large quantities of high calorie, low nutrient foods. On the flip side, people have lost their internal partners in nutrient absorption and natural defenders against bad germs due to the overuse of antibiotics.

Ever since men began to see hidden life under a microscope, we’ve been at war with pathogenic microbes, not understanding we’ve also been killing the allies that have been helping us thrive for millennia.