One hundred years ago this week the unsinkable ship sank. The ship may be gone, but the fascination for the Titanic never ends. Here are some new publications, just in time for the anniversary of the tragedy. 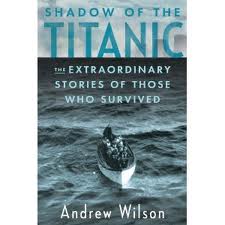 Shadow of the Titanic: the Extraordinary Stories of those Who Survived by Andrew Wilson – Although we think we know the story of Titanic –the famously luxurious and supposedly unsinkable ship that struck an iceberg on its maiden voyage from Britain to America–very little has been written about what happened to the survivors after the tragedy. How did they cope in the aftermath of this horrific event? How did they come to remember that night, a disaster that has been likened to the destruction of a small town?

Titanic Tragedy: a New Look at the Lost Liner by John Maxtone-Graham includes dramatic survivors’ accounts of the events of the fateful night, the role of newly invented wireless telecommunication in the disaster, the construction and its ramifications at the famous Harland and Wolff shipyard in Belfast, and the dawn rendezvous with the rescue ship Carpathia.

Voyagers of the Titanic: Passengers, Sailors, Shipbuilders, Aristocrats and the Worlds they Came From by R.P.T. Davenport-Hines – a magnificently written history that brings into focus the people involved in this legendary tragedy–the deal makers and industry giants behind the ship’s creation as well as its passengers, both aristocrats and immigrants, and its crew.

The Band that Played On: the Extraordinary Story of the Eight Musicians Who Went Down on the Titanic by Steve Turner reveals a fascinating story including dishonest agents, a clairvoyant, social climbers, and a fraudulent violin maker. Read what brought the band members together and how their music served as the haunting soundtrack for one of modern history”s most tragic maritime disasters.

Bad Behavior has blocked 1494 access attempts in the last 7 days.