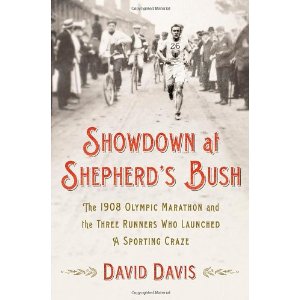 Showdown at Shepherd’s Bush by David Davis recounts the epic clash of an Irish-American, Italian, and Onondaga-Canadian that jump-started the first marathon mania and heralded the modern age in sports.

The eyes of the world watched as three runners – dirt poor Johnny Hayes who used to run barefoot through the streets of New York City; candymaker Dorando Pietri; and the famed Tom Longboat – converged for an epic battle at the 1908 London Olympics. The incredible finish was contested the world over when Pietri, who initially ran the wrong way upon entering the stadium at Shepherd’s Bush, finished first but was disqualified for receiving aid from officials after collapsing just shy of the finish line, thus giving the title to runner-up Hayes. In the midst of anti-American sentiment, Queen Alexandra awarded a special cup to Pietri, who became an international celebrity and inspired one of Irving Berlin’s first songs. David Davis recalls a time when runners braved injurious roads with slips of leather for shoes and when marathon mania became a worldwide obsession. (description from publisher)