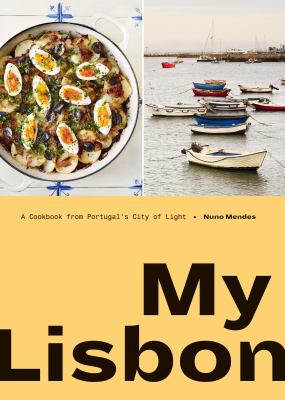 My Lisbon: A Cookbook from Portugal’s City of Light by Nuno Mendes is an example of cookbook as travelogue.  It’s a joy to peruse.  Mendes is an engaging writer; his prose captures the mood and spirit of Lisbon. Interspersed with recipes are his vignettes of life in Portugal – Lisbon in particular.  Not only is the text authentic and breezy, but the photos are so spontaneous – you feel as if you’ve glimpsed private moments in the public spaces of this urban, yet warm and relaxed  city.  The oldest part of Lisbon, Alfama, is particularly intimate – the streets are so narrow and there is often virtually no space between the public street and a family’s private living area beyond a thin wall or window. Laundry is literally aired  in public; just look above you!

Whenever I visit a new city or country, I have so many questions. Why do  they do this? What’s the history of that?  This book is ideal for solving these mysteries. After a recent visit to Lisbon, I wanted to know more about why lisboetas decorate the facades of their houses and restaurants with Christmas decorations  – in April. It has to do with the festival of Santo Antonio in which sardinhas (sardines) are enthusiastically celebrated – cooked, eaten and enjoyed in the streets and restaurants.

I wanted to know the story behind the elegantly shabby azulejo (tile) on its buildings. As a native, Mendes speaks with authority and experience about the smells, tastes and sounds of a city that has been dependent on the sea for hundreds of years. Mendes is also a restaurateur so he provides fascinating detail about  the stories behind local ingredients and specialties  (salt, sardines, ham, and custard and more). Many times these stories relate to Portugal’s glory days in the 15th and 16th centuries when its navigators ruled the oceans and claimed vast portions of the globe for their country.

I’ve devoured many guidebooks, dvds, and travelogues about Portugal, but, to me, this book truly captures what’s special about this magical city.

Bad Behavior has blocked 1338 access attempts in the last 7 days.