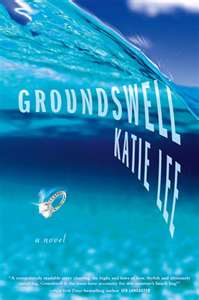 Kentucky native Emma Guthrie has just lost her film scholarship to a prestigous New York university and now she is in desperate need of work in Katie Lee’s fiction debut, Groundswell.    After sending out dozens of resumes for any and every job in the film industry, she receives a surprise email from a production company asking her to report to work in the morning as a temporary production assistant for the upcoming summer blockbuster.  Little does Emma know that this small event will completely change her life.

As a jack of all trades on the set, one day her assigned task is to deliver lunch to the star of the movie, Garrett Walker.  From their first meeting, he is smitten.  After tentatively accepting a date with the known womanizer, Emma becomes the girlfriend of one of the biggest movie stars in the world.  She quickly becomes accustomed to the life of luxury, but after a quick engagement and secret, paparazzi-free wedding, she begins to long for a career of her own.  With some film experience under her belt from her college days, she writes a fictionalized story of her life, Fame Tax, which becomes the summer’s biggest romantic comedy.

Without any warning, Emma is betrayed and her marriage is hanging by a thread.  Needing a break from the circus-like atmosphere revolving around her, she escapes to a small, sleepy village in Mexico where she meets, Ben, a surf instructor who teaches her both how to surf and how the smallest events in life can eventually lead to the greatest rewards. 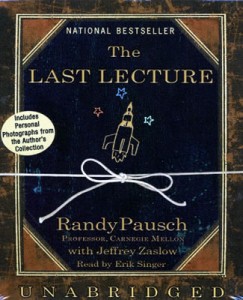 The audiobook, The Last Lecture by Randy Pausch,  read by the author,  is bittersweet because he and the audience know his time is short. A computer professor who is aware that he has less than a year to live wants to leave his children and students a legacy of the principles, ideas and beliefs he has gathered over the years.

In this lecture, “Really Achieving Your Childhood Dreams,” Pausch is brutally honest about himself and his disease, yet he never loses his sense of humor.

Parenthood, marriage,education, science and Walt Disney are all examined. He is not falsely modest, and attributes his success to being able to learn from others and his mistakes.

It makes you wonder – what lessons you would impart to the next generation?