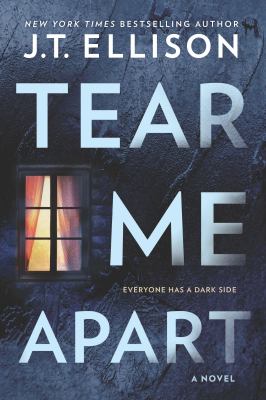 I recently stumbled upon author J.T. Ellison while looking for a new book to read on OverDrive. I had heard of Ellison in the past, but had never read anything she had written before. The description of her most recent standalone novel Tear Me Apart captured my interest because the description of the book seemed pretty straight-forward, but once I started reading, I realized that this book was going to be anything but straight-forward.

Tear Me Apart by J.T. Ellison tackles the question of how far a parent is willing to go to save the life of a child. Mindy Wright is a competitive skier at the top of her field. Despite being only a teenager, Mindy has a great chance of making the Olympic team. Competing on a course she is very familiar with, Mindy is sure she will win her current race. The weather is getting progressively worse, yet race leaders haven’t decided to halt Mindy’s run. Mindy’s life is derailed after she suffers a catastrophic downhill crash. Her leg is broken and she is rushed to surgery.

In surgery, doctors discover a complication: Mindy is suffering from a severe form of leukemia. On top of recovering from surgery, Mindy must undergo treatment for leukemia. With her condition worsening, the doctors realize that a stem cell transplant is her only hope. Mindy’s parents and her aunt are tested to see if they’re a match. When the results come back, they are all stunned to see that Mindy is not biologically related to any of them.

Mindy’s aunt works for the Colorado Bureau of Investigation in the lab and does some looking into the DNA in the case. How could Mindy not be related to any of them? In the race to save Mindy, multiple lies and secrets are uncovered stemming back to before Mindy was even born. As her aunt tries to figure out a way to save her, readers are left to wonder if Mindy was switched at birth or if a more disquieting plot unraveled at the time of her birth. What is her mother keeping secret? Why is she holding back and seeming to change her story so often? One look at her face and others around her start to doubt the validity of her claims.

As the search for Mindy’s truth progresses, the secrets revealed and the tension created begin to tear the family apart and put everyone on edge. Certain members of the family are willing to do whatever it takes to protect their secrets. With Mindy’s fame as a skier, the press becomes involved when a statement is released pleading for help to find a match and to hopefully keep the rumors at bay.

How far would you go to save a child? To keep your secrets hidden? This novel digs deep into the hidden links, layers, betrayals, and secrets that have served to bind two separate families together over many, many years. Would you fight to keep the darkness and secrets buried even when the truth could potentially save someone? What about if those secrets could break apart your entire world? How long would it take you to thoroughly believe the web of lies you created for yourself and your family? Would you forget your real identity and the lives of the ones around you? Ellison weaves a gloriously tangled suspenseful thriller of a novel that will have you wondering if the people you see on a daily basis are really telling you the truth.