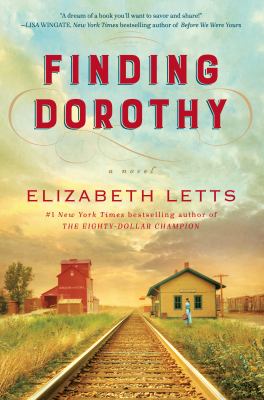 I love The Wonderful Wizard of Oz by L. Frank Baum so much so that I wrote one of my final thesis papers comparing the book to the movie starring Judy Garland. This book and the subsequent series helped shape me to become the person I am today.  Knowing this, imagine my excitement when I saw a new book by Elizabeth Letts called Finding Dorothy on the  shelf at work.

Finding Dorothy by Elizabeth Letts is inspired by the story behind The Wonderful Wizard of Oz. L. Frank Baum’s wife, Maud, serves as the catalyst for this book by showing readers what is happening both in 1938 Hollywood and in her past both as a child and a newlywed. In Hollywood in 1938, Maud has learned that M-G-M is adapting Frank’s masterpiece for the screen. Without being asked her opinion on this development, seventy-seven-year-old Maud is convinced that she must make it on to the set in order to talk to the movie producers. Eventually making her way to the lot, Maud is eager to fulfill the promise that she made to Frank: the movie will stay true to the spirit of the book. Maud is the only one left who remembers the secrets of the book.

Maud is invited to the set where she witnesses Judy Garland rehearsing ‘Over the Rainbow’. As she closes her eyes, Maud finds herself transported back to the past. The yearning that Judy infuses into the song is reflective of the yearning that burned through Maud as she was growing up. Maud grew up in the shadow of her suffragette mother. When she decided to go to college, Maud made her way as one of the first women in the Ivy League. Meeting Frank one day drastically changed her life and Maud soon found herself growing fond of this young fellow. As their life grew together, Maud and Frank struggled. Desperate for a new beginning, they moved to the prairie where their life became even harder. The difficult times they experienced together on the prairie helped influence and inspire Frank as he wrote The Wonderful Wizard of Oz.

Watching Judy Garland bring Dorothy to life reminds Maud of the young girl that she helped to raise in South Dakota. Maud strives to help Judy more than she was able to help the other young girl. Seeing Judy under immense pressure from the studio and witnessing first-hand the advances the men made towards her serves to further strengthen Maud’s resolve to protect Judy.

Finding Dorothy by Elizabeth Letts works to tie together two storylines: the lives of the Baum family members beginning in the 1860s and the development of The Wonderful Wizard of Oz in 1938 Hollywood. Even though Letts imagines the dialogue between the characters, this book is a reflection of her dedicated abilities as a conscientious researcher. Her in-depth research into the lives of Frank and Maud Baum allowed Letts to capture how one family persevered through a mess of love and loss to create a book that has inspired many generations of readers.