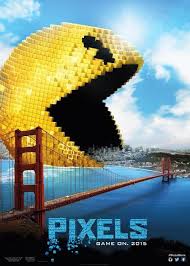 I admit, after watching this movie, I do not know if anyone that was born after 1985 would enjoy this movie.  Maybe they would if they like to play old arcade games when they come across one.  But playing an arcade version of Pac Man at Happy Joes is nothing like going to an actual arcade and being surrounded by various games and players. But I digress.

If you do remember going to the arcade and playing games such as Donkey Kong you will find the movie Pixels enjoyable.  No, it will not win any Oscars but it is a fun movie to watch.  Starring Adam Sandler, Peter Dinklage, Kevin James and Josh Gad, this fearless foursome were the some of the top arcade game players back in the day.  The movie opens in 1982 with Brenner and Eddie facing off for the championship.  At the time, a time capsule is launched into space containing various things including video games.

Fast forward to the present year.  Aliens attack a U.S. military base in Guam.  The attack came from creatures that looked similarly to the old video game Galaga.  Cooper is the current President of the United States and he calls his old friend Brenner for help.  The aliens have sent messages to Earth. They received the time capusle from 1982 and they viewed it as a declaration of war.  The aliens have sent video games in the form of pixels to attack Earth.  In order to survive, Earth has to win three rounds of classic video game attacks.  A second attack happens at the Taj Mahal in India before the U.S. is able to react.

Brenner and Ludlow train a group of soldiers to fight the video games.  The key to defeating the game is knowing the pattern.  When a third attack happens in London, the soldiers, Brenner and Ludlow fight off the alien video game version of Centipede. Even the soldiers tried, it is Brenner and Ludlow that save the day.  The fourth game is in New York City and the game is Pac Man.  In order to defeat this game, they are going to need four ghosts.  This is where Peter Dinklage comes into the movie.  The fourth ghost is played by Pac Man creator Toru Iwatani.  Watching a giant Pac Man chomp down the streets of New York is a visual experience I never expected to see.  Eventually Pac Man is defeated until the aliens send a message that one of the ghosts cheated.

The next attack is in Washington, D.C.  And this time, it is not just one game.  It is ALL the video game characters attacking Earth.  For Earth to win, the game Donkey Kong has to be defeated.  Even President Cooper joins the action and fights the aliens.

Before you watch Pixels, you should watch the documentary, The King of Kong: a Fistful of Quarters.  Unemployed school teacher Steve Wiebe has a Donkey Kong, Jr arcade game.  He spend

s a lot of time playing it.  He looks up the high score for Donkey Kong, and thinks to himself that he can beat that score.  So Steve Wiebe goes after Billy Mitchell’s high score for Donkey Kong.  You may think that no movie about a Donkey Kong score could be interesting to watch.  But you would be wrong.  Apparently, those high scores still matter to a lot of people.  It is an intense experience watching Wiebe go after the high score.  I mention this documentary because you will quickly notice the similarities between these characters and the main characters in Pixels.