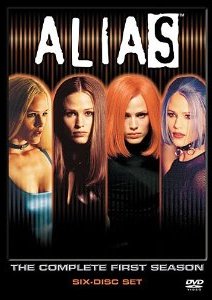 I feel a little bit silly now realizing that Alias:  Season One began airing almost ten years ago, and yet I am only now getting into this awesome series.  It stars Jennifer Garner as Sidney Bristow, a grad student who is part of what she thinks is a covert branch of the CIA called SD-6.  After getting engaged, she decides she has to come clean to her fiance about being a spy.  Unfortunately, since her status has now been compromised, the head of SD-6 orders that Sidney’s fiance must be killed.  This is when Sidney learns the horrible truth about SD-6:  they’re not really part of the CIA.  Rather, they’re part of an organization that the real CIA has been fighting for years.  At the end of the pilot episode, Sidney goes to CIA headquarters and offers to be a double agent and help them bring down SD-6 once and for all. 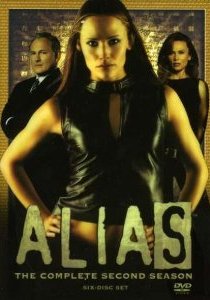 So far I’ve only gotten through season one, but I’m definitely interested in seeing more (I just checked out Alias: Season Two and I’m dying to go home and watch it!).  It’s hard to not keep watching, especially since almost every episode ends with a cliffhanger!  One of the things I have found most interesting about the series is the relationship between Sidney and her father, Jack Bristow.  After finding out that her father has also been working for SD-6 for years, she is surprised once again to find out that he’s also a double agent for the CIA.  The two have never had a close relationship, so through their double agent work, they’re getting to know each other once again.  It’s a really interesting dynamic and I’m enjoying watching it develop.  The cast is great and gels together well, and the series is well-written and has a lot of exciting action sequences.  I highly recommend it, especially if you like other J.J. Abrams series such as Lost or other dramas where women kick butt, like Buffy the Vampire Slayer.