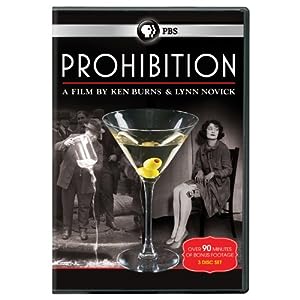 Do you get psyched about the prospect of panning over black and white photos while a narrator describes what is going on in those photos? If you said, “Yeah, buddy!” then Ken Burn’s brand new Prohibition is for you.

With a total running time of 6 hours, it is relatively digestible as the equivalent of watching three movies. And in all seriousness, these black and white photos featuring denizens of the Jazz Age are truly intriguing. Even more so is the occasional bit of footage of flappers dancing, heaven knows the source.

It is not the documentary for you if your heart bleeds at the sight of innocent glass jugs being blasted apart by Volstead enforcers or the occasional bullet-riddled pinstriped gangster.

Fun Prohibition facts:
“Bad guy” Al Capone financed the soup kitchen that fed thousands on Chicago’s south side as the Great Depression took hold. The best charge the feds could level against Mr. Capone (other than keen business acumen in a market they created) is income tax evasion. Shockingly he didn’t declare all his profits on his 1040-EZ form.

Small cities of Bahamanian freighters would drop anchor three miles off the Atlantic coast to make deliveries to local boats. No one cared.

Many “Dry” congresspeople drank, some even accepting deliveries at the Capitol.

Alcohol consumption increased in some cities.

Some milkmen would deliver hooch to your doorstep in innocuous bottles to streamline the purchasing process.

I’ve never watched a documentary from the renowned master, Ken Burns. This was time well spent.

Bad Behavior has blocked 1651 access attempts in the last 7 days.