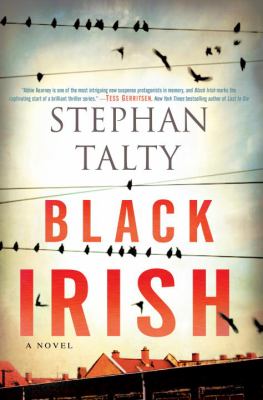 I have a fascination with serial murderers, the grislier the better. I snatch up books about them as quick as I can, but veer away from television shows because they seem too formulaic and predictable. The books that I have read/listened to recently have all been reliably gritty and suspenseful. I stumbled upon Black Irish by Stephan Talty a week ago and loved it.

Black Irish is delightfully gruesome and mysterious. Absalom ‘Abbie’ Kearney is a detective in South Buffalo. Even though her adoptive father is a revered cop, Abbie is considered to be an outsider in this working-class Irish American area because of her dark hair, druggie mother, mysterious father, Harvard degree, and a myriad of other reasons. Her troubled past makes her current life in South Buffalo difficult as she works to earn the trust and respect of everyone in ‘the County’. The County is full of fiercely secretive citizens who look out for their own and shun outsiders. Digging for the truth or trying to find out about her past is nearly impossible for Abbie without the help from accepted local Irish good-ol’-boy cops and detectives. Because of this, Abbie works even harder to prove herself to be more than capable and worthy of her badge, much to the chagrin of the locals.

When a mangled corpse is found in a local church’s basement, the very church that Abbie herself attended, the County finds itself unnerved. A message seems to sweep through the area. While Abbie is the lead detective on the case and is running the investigation, she finds that other detectives, and more importantly the locals, are taking it upon themselves to solve the case. The code of silence and secrecy that began in Ireland still exists in the County, making Abbie’s search for the killer even more difficult. This secrecy stonewalls her everywhere she goes, even at the Gaelic Club which her father frequents. Shaking down leads is difficult and Abbie soon finds herself receiving vicious threats and warnings.

The killer has a clear signature and with each passing day, Abbie thinks she is getting closer. With more people murdered, Abbie finds this case consuming her. While working to solve these crimes, the killer is slowly circling closer and closer to Abbie, until finally dropping into her life. Abbie is left to dig into her own past, her family’s past, how everything is related to the County, and also how the County’s secrets just may end up destroying everything in which the whole community believes.

This book hooked me from the start. The narrator uses different accents for each character which made them all easy to follow. Stephan Talty has woven a masterful examination into the cone of silence in closed off neighborhoods, even when that code hides dangerous, murderous pasts and people. I greatly enjoyed this book and can’t wait for more.

Bad Behavior has blocked 1698 access attempts in the last 7 days.