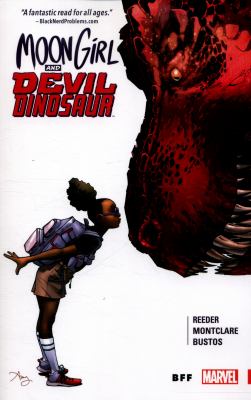 Marvel seems to be switching up plot lines every couple years, but the one that is all over my radar right now revolves around the inhumans. Do I have a basic understanding of what’s going on with the inhumans? Yes. Do I feel qualified to explain it to someone else? No, not really, but I can certainly muddle my way through and look up a good explanation. Since I’m not a fan of having to rely on something else to fill my knowledge holes, I decided to look up inhumans. I struck gold.

I discovered Moon Girl and the Devil Dinosaur, a juvenile Marvel graphic novel, about Lunella Lafayette, a preteen genius who also happens to be an inhuman. Lunella, aka Moon Girl, wants to change the world and is using her genius to create inventions that are helping her. Slight problem though. Ever since Lunella discovered that she has a latent inhuman gene, she’s been terrified of the terrigen mist cloud that is encroaching on New York City that will change her into something inhuman, something she isn’t even remotely prepared for. Lucky for Lunella because she has a plan. She has been chasing something called an omni-wave projector and she thinks she knows where it is.

Everything seems to be working out for Lunella until she finds the omni-wave projector and then a giant red-scaled beast, a devil dinosaur, is teleported from the pre-historic past to today! to a bustling New York City. With the devil dinosaur comes the Killer-Folk, prehistoric savages that want the Omni-wave projector too. Lunella finds herself battling monster hunters and the killer-folk at the same time as she is dealing with school and her parents. Getting into a good school and changing the world is proving to be more difficult than Lunella thought it would be!