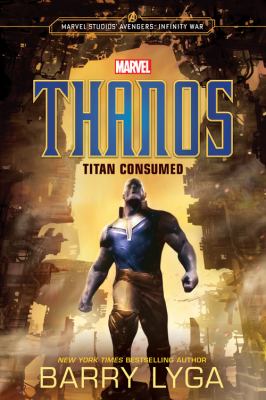 If you loved your experience watching Avengers: Endgame when it came out back in April and you want to learn more about the Villain of the film, Thanos, then I have great news for you. The Davenport Library has a plethora of resources that you can sink your teeth into.

The Infinity Gauntlet  is the original graphic novel that inspired the events of both Avengers: Infinity War and Avengers: Endgame.

If you are more into a recent comic that features Thanos fighting the Avengers, we have you covered there too. Infinity  is a graphic novel that came out in 2014 that follows Thanos and his invasion of Earth while the Avengers are fighting an intergalactic conflict at the same time and earth’s mightiest heroes are spread between the two conflicts.

If reading novels is more your thing, we also have the novelization of the film Avengers: Infinity War written by Liza Palmer that covers all of the events from the movie entitled Destiny Arrives.

If you want to learn more about Thanos as a character, there is also the graphic novel Thanos: Titan Consumed available to check out. This graphic novel follows the origins of the Mad Titan from when he was young until he begins his quest for the Infinity Stones and gives insight into how the character became the galaxy-conquering destroyer that we see in Endgame.

All of these resources and many more are all available at your Davenport Public Library.