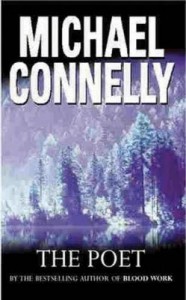 Looking for an author who is not only prolific but a dependably good storyteller? Michael Connelly has written over 21 books, and continues to create new characters and develop relationships between old characters.

In The Poet, written in 1996, reporter Jack McEvoy’s brother has apparently committed suicide. Jack can’t believe that his twin brother, a homicide cop, would have killed himself. To clear his brother’s name, he starts to investigate several anomalies. This  leads Jack to research the deaths of homicide detectives around the country. Because he is a crime reporter for Denver newspaper, Jack can both write a story about the serial killings and find out what happened to his brother.

He ultimately combines forces with the FBI whose vast resources jump start the race to catch  the Poet. McEvoy knew that there was a serial killer when he found out that the various suicide notes contained lines from Edgar Allan Poe poems. What the FBI uncovers about the killings is very disturbing for Jack as he gains more knowledge about how his brother died.

Connelly’s skill is in combining an absorbing plot and likable protagonists; a great go-to guy when you just need a good read. 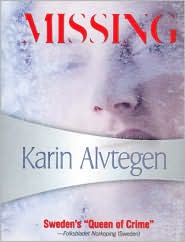 This great crime novel is translated from Swedish which adds a different flavor to the story. Certain things get added during translation or become more interesting when taken from slang. Sibylla the main character in Missing comes from a privleged background yet has chosen a life of the homeless in Stockholm. Brief snippets from Sibylla’s disturbing past help explain her modern day predicament. Her everyday struggle becomes almost unbearable after she is unjustly accused of a brutal murder. The story continues to pick up speed as Sibylla struggles to stay alive and hidden all the while trying to find the real killer with the help of a high school misfit. Great writer – I was easily transported into Sibylla’s world. The murder plot is well developed and unexpected.

Karin Alvtegen has received and been nominated for several literary awards. Interestingly she is the great-grand niece of the “Pippi Longstocking” series author, Astrid Lindgren.

Bad Behavior has blocked 1403 access attempts in the last 7 days.