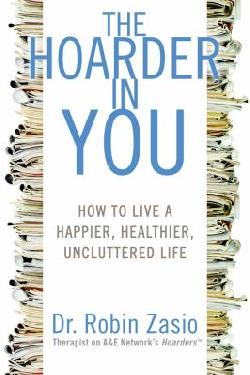 The once little-known condition of hoarding has become a household phrase – in part due to the popularity of the Emmy Award-winning television show Hoarders, which has captivated audiences with its stark and heartbreaking look at the people who suffer from this paralyzing condition. Now The Hoarder in You helps you overcome your worst hoarding compulsions.

Our fascination with hoarding stems, according to Dr. Robin Zasio, from the fact that we all fall somewhere on the hoarding continuum. From compulsive shoppers to hobbyists and collectors to ordinary, run-of-the-mill pack rats – to some degree or another, we all hoard. Dr. Zasio shares behind-the-scenes stories from the show, including some of the most serious cases of hoarding that she’s encountered – and explains how we can learn from these extreme examples. She also shares psychological and practical advice for de-cluttering and organizing, including how to tame the emotional pull of acquiring additional things, making order out of chaos by getting a handle on clutter, and creating an organizational system that reduces stress and anxiety. (description from publisher)

No, it’s not a neat hybrid of Hoarders and Extreme Couponing, but merely an impression after viewing a piece of an episode of the latter.

Widely-renowned and nationally-syndicated consumer savings columnist Jill Cataldo broke apart a recent episode of the TLC hit with Zapruder-like detail to reveal what fundamentally is theft, your perception depending on the plumb of your ethical barometer.

Far be it for me to not want a great deal or occasionally sneak one past the goalie.  There’s also the “everyone else is doing it” defense, or the “system allowed it, so it’s fair game.”   I’m very familiar.  A practitioner, in fact.  And honestly, why does a grocery’s UPC system treat all code families from certain product manufacturers as interchangeable?  I don’t know, and none of us can expect a checker to parse through 4 carts of items for validity.  On an off-note, who would pull a stunt like this in public without wanting to go take a long hot shower for want of feeling like such a sleaze?

But, it stands to reason that when you game the system for $1800 worth of merchandise for $100, there’s no down-on-her-luck-plucky determinism origin story that can explain away why the suburban mom needed sixty bottles of yellow mustard to sit on a heavy duty rack in the garage.  You aren’t going to make that much potato salad.  There’s some kind of pathology here.

It’s easy to do because of the remoteness of the nameless, faceless victim.  Guess who it’s not?  It’s not the manufacturer, or even the store.  Its the saps that have to help eat that loss.   The rest of us with a semblance of decorum.

In other news, the show also features “extreme” Nathan Engles, who rather than counting and hoarding groceries, puts together care packages for military families.  Very cool.