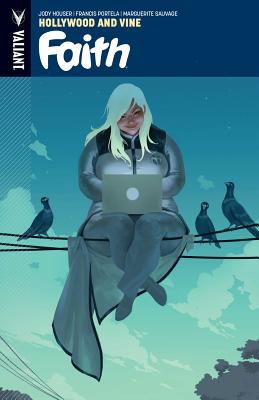 Faith, Volume 1: Hollywood and Vine is a refreshing step back from the traditional female superhero tale. This first volume introduces Faith Herbert, a woman orphaned at a young age who has always wanted to do something great. Faith is a psionically gifted psiot, which basically means that Faith can fly and has telekinetic powers. She’s a body positive plus-size superhero known as the Zephyr. Pretty cool.

Now Faith is striking out on her own, having broke up with her superhero boyfriend and her crime-fighting superhero group all at almost the same time. She has decided to take control of her life and live how she’s always wanted to be: in control of her own destiny. This means that Faith is working a day job as a reporter with a secret identity and a group of colleagues who have no idea that she is Faith Herbert OR the Zephyr.

Patrolling at night, Faith stumbles upon a conspiracy revolving around the disappearances of multiple psiots around the city. Her private and public lives come to a screeching collision at her work place, where Faith is forced to mesh her two worlds together and hope things work out. The missing psiots occupy Faith’s mind, leaving her to patrol more and ask questions. She uncovers a mysterious plot to use the psiots by aliens. Of course it’s aliens. This conspiracy is deeply-rooted in entertainment, politics, and regular societies. Faith uses her superhero savvy to save the world, but finds she may need help.