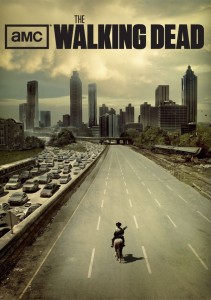 Looking for something to get you in the Halloween spirit?  What’s better than a good zombie story?  The Walking Dead has aired two seasons on AMC so far and the library owns both.  Sheriff’s Deputy Rick Grimes wakes up from a coma after being shot on duty to discover that while he was asleep, the world has changed.  At least half of the population has been wiped out.  There’s no more government, no military, and none of the comforts of the world he remembers.  And what’s more, all those people who have died have woken back up as bloodthirsty zombies.  Rick must struggle to survive and find his family who he knows must still be alive.

I’m not usually into scary or gory stuff, but this series is so compelling that I was immediately hooked.  It reminds me of my all-time favorite show, Battlestar Galactica; at its heart, The Walking Dead is a drama about how people deal with the destruction of their world and figure out how to survive while still dealing with the issues of their past.  If you can’t get your hand on a copy of the DVDs, the library also owns the graphic novels that the show is based on.