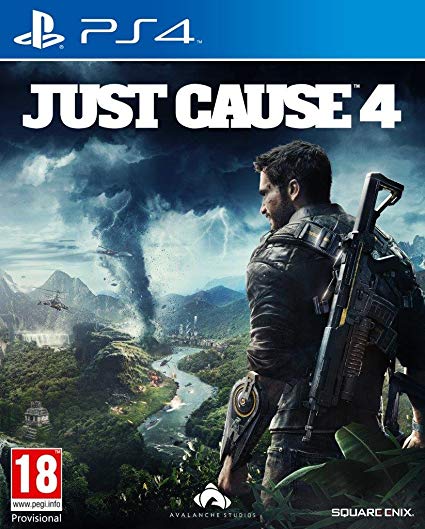 e you ever wished that you were a star in an action movie where the normal laws of physics don’t apply to you? Have you ever wondered what it would be like to grappling hook yourself to a plane as it gets thrown around in a tornado and then use your wingsuit to fly safely to the ground, fighting bad guys as you do it? If you said yes to any of that, then Just Cause 4  might be the game for you.

In Just Cause 4 you play as Rico Rodriguez, as he looks into Project Illapa, a program aimed at controlling weather patterns in the fictional South American country of Solis. This action-adventure game has you fighting against the Black Hand, a private army tasked on seizing control of Project Illapa and using its powers for nefarious means. While the story is a continuation of the story from previous games, it isn’t necessary to have played the previous entries to enjoy the frantic and chaotic gameplay of this most recent addition to the franchise.

This game features new advances in developer Avalanche’s Apex game engine that allows for extreme weather patterns such as sandstorms, thunderstorms, tornadoes, blizzards and more to feature prominently in the open world gameplay. The open world also features a range of diverse locations and biomes to traverse such as ancient ruins, thick tropical jungles and as well as cityscapes.

This game is available on both the Xbox One and PS4 at the Davenport Public Library.