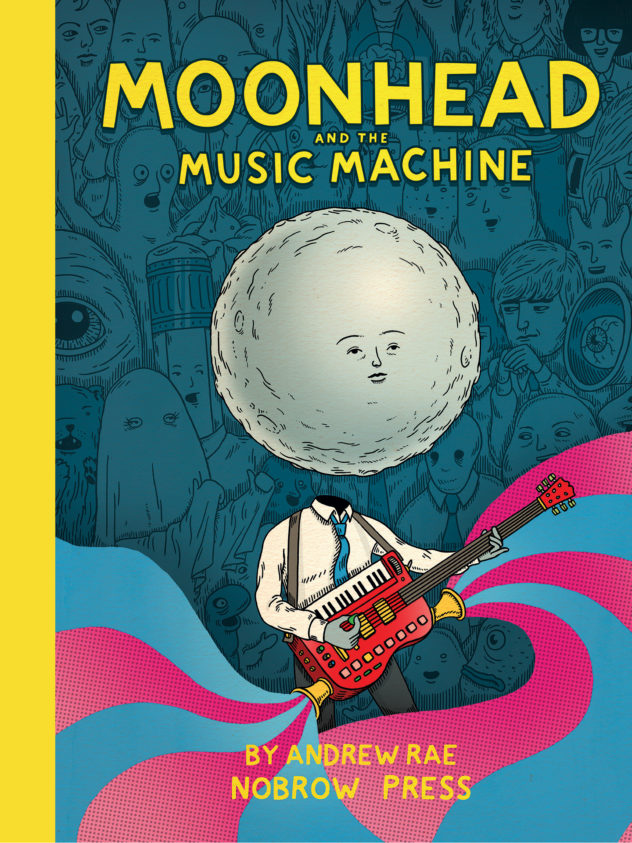 I’m a sucker for fantastic  artwork and, lucky for me, Moonhead and the Music Machine is packed to the gills with gorgeousness. I want to buy individual prints of various scenes in this story and put them on my walls. Author and illustrator, Andrew Rae, is a seriously talented graphic designer who also does animation in addition to illustrating a number of comic books, graphic novels, and zines. You can check out his work at Moonhead Studios here! Moonhead t-shirts, anyone? Sign me up yesterday.

In terms of storyline, Moonhead and the Music Machine is a classic underdog tale in which Joey Moonhead, the main protagonist, must defy his bullies and wear his uniqueness (his strength) like a badge of honor.  Early on in the book, Joey attempts to engage with his parents who are both aloof and neglectful. Subsequently, he spends a lot of time alone in his room and his mind begins to wander, quite literally. The thing about Joey’s head is that it’s a giant moon that can detach and float through space independent of his body. Naturally, I think about how perhaps Joey’s moonhead is allegorical with daydreaming or even escapism, hallmark characteristics of being a young person who is discovering his or her own dreams and ambitions but who also experiences a fair amount of alienation (from parents, authorities, peers, etc). Initially, Joey’s wandering head tends to get him into trouble with parents, teachers, and friends.

That is, of course, until he learns how, with the help of willing adults and friends, to channel and harness his creative energy and embrace his individuality. Sockets, his best friend, is a big part of helping him navigate the hallways and social terrain of high school where Joey posits that that the adults are “training us to conform…to be factory workers!” Of course, Socket’s response, which is the other side of an age-old argument about education, maintains that “getting good grades” is one ticket to being able to determine your own path without being self-sacrificial. Joey & Sockets share a playful and sweet friendship in which they respect but still challenge each other’s opinions. 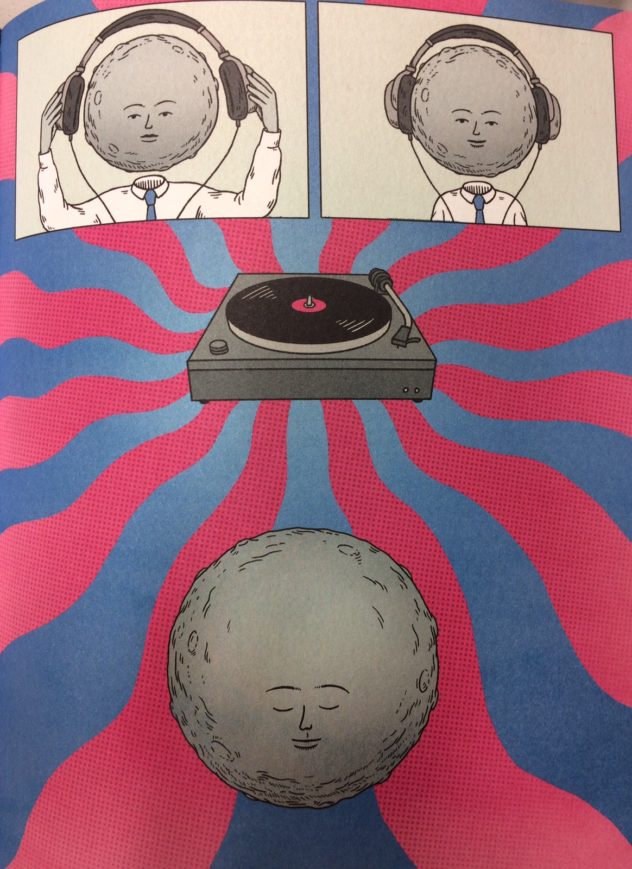 Enter music. Like many teens, Joey stumbles upon music in an organic way after having a parent-teacher conference that results in Joey’s finding a record player and a set of headphones. Whereas Joey’s head once levitated just above his body, ready at any moment to float away, it now was tethered to his record player by way of his headphones. Music is very “grounding” and facilitates connectivity unlike any other medium due to its accessibility and transcendence of time/space and language boundaries. To boot, I was overly excited about how Rae re-imagined classic album artwork design for album covers by musicians like David Bowie, Captain Beefheart and the Magic Band, and many others.

Once Joey is infected by the music bug, there is no going back. After taking interest in a music machine-building project, Joey meets the mysterious Ghost Boy and together they dazzle their classmates during a talent show after building a key-tar esque instrument (half-keyboard, half guitar) and bringing the house down. After their performance, Joey is overcome by the response of his peers who are inspired by the overall message Joey sends: to embrace and find strength in your individuality–in your moonhead. It may be important to note which of your friends stick by you even at your worst, when you don’t have anything of monetary or social value to offer aside from your friendship. They are the real deal, people. Read this graphic novel simply for the gorgeous artwork but find richness and multiple layers of meaning in its simplicity. 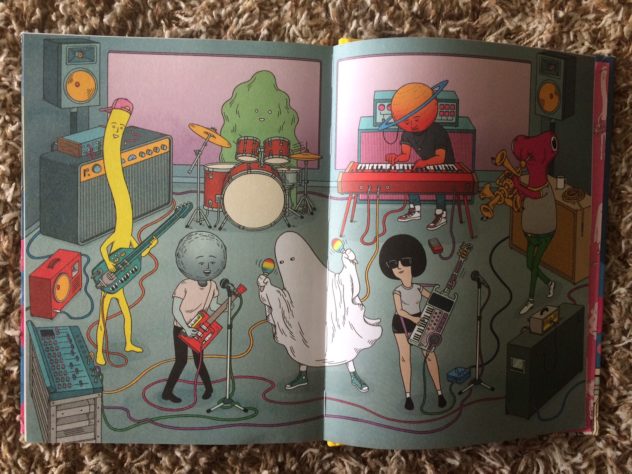 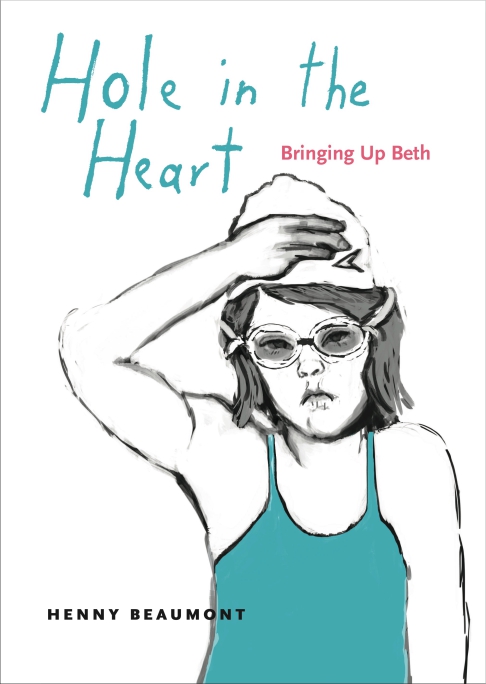 Henny Beaumont’s Hole in the Heart: Bringing Up Beth was immediately relatable and bold in how it approached the subject of raising a child with a disability. This work of Graphic Medicine happens to be my first and it most certainly will not be my last. The editorial page notes that “For healthcare practitioners, patients, families, and caregivers dealing with illness and disability, graphic narrative enlightens complicated or difficult experience”. The are other titles in the Graphic Medicine series that may also interest you. Try The Bad Doctor: The Troubled Life and Times of Dr. Iwan James or My Degeneration: A Journey Through Parkinson’s.

Having an interest in medicine, I was struck by the double-entendre in the title. “Hole in the Heart” works on a couple of different levels. Quite literally, a hole in the heart in this case refers to an Atrioventricular Septal Defect (AVSD). Imagine the pain of giving birth to your child to discover that she likely has genetic heart problems that will require surgery.  Figuratively, the initial sense of loss, pain, or despair you experience is akin to having a hole in your heart. Even the subtitle “Bringing Up Beth” works on a couple of different levels. First, “bringing up” refers to raising someone from childhood to adulthood. Yet Beaumont is also bringing up the difficult subject of raising a child with special needs.  How would you react if a doctor (with the bedside rapport of a chair) approached you while you were holding your daughter for the first time only to inform you of the likelihood that she has Down’s Syndrome? And why does having Down’s Syndrome have to signify the sky falling or the end of the world? It simply does not.

The beauty of this book, and like the experience of reading books in general, is that you will see Beth and other people with Down’s Syndrome through the eyes of Hen. Sympathy–perhaps even empathy–is one powerful way reading helps creating understanding between ourselves and others who are different than we are. In one particular scene, Hen is making small talk with acquaintances who tend to tip-toe around the subject (Beth), in order to avoid talking about her as though she’s some kind of secret. Beaumont brilliantly pulls us into the conversation and shows us that referring to someone’s “Down’s baby” is disrespectful and callous. The appropriate and respectful way to refer to people with Down’s is exactly that: people who just happen to have Down’s.

As Beth matures, her family must grapple with the challenges of inclusion and acceptance in the classroom and beyond. What does true inclusion look like? Beth’s sisters joke that a school will utilize a picture of a student with Down’s just to appear inclusive in promotional and marketing materials; but truly embracing acceptance and inclusion looks and sounds different.  In another scene, Hen looks forward to meeting with Beth’s teacher. Just as you think the teacher is about to compliment Beth on her own terms, she instead gloats about “how TOLERANT” Beth’s classmates are (as though its her ability to be tolerated that makes her noteworthy.) You see the problem here: defining a person in terms of how they can be useful or tolerable for others (rather than being innately worthy in and of themselves) is de-humanizing and plain wrong.

I was working at the reference desk when I began discussing books with a patron. The topic of graphic novels came up. I mentioned that Hole in the Heart: Bringing Up  Beth  was  moving and that I cried while reading the last page of the book. The accompanying image (likely charcoal or pencil?) is beautiful–something many people can relate to. The patron looked perplexed. “You cried? ” he asked. The picture and sentiment simply embodied love & acceptance. “I did”, I replied.

If you’re skeptical that Graphic Novels can be emotionally complex and deeply moving, please read this book!