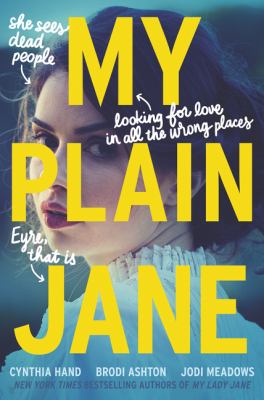 The Janeites (authors Cynthia Hand, Brodi Ashton and Jodi Meadows) are back with a fix-it for another sad Jane story (after the lovely My Lady Jane) and that makes a lot of their fans very happy.

My Plain Jane takes on the fictional Jane Eyre and the very real Charlotte Bronte, except that here, Jane is a real girl. It opens in Northern England in 1834 where both girls are living in a less-than-comfortable boardinghouse where it’s always too cold and there’s never enough food. Both girls have big dreams, but their prospects are meager at best. The twist is that Jane can see and control ghosts. Of which there seem to be a great many.

The ghosts do not frighten Jane, nor do they harm her. In fact, the ghosts are very fond of Jane. However, no one else knows Jane’s secret and when she is seen whispering to what appears to be thin air, she is labeled as odd and awkward and is a social outcast. Charlotte (who is also something of an outcast) is her only (non-dead) friend. Everything changes when handsome Mr Blackwood from the Royal Society for the Relocation of Wayward Spirits arrives to perform some ghostbusting. Jane tries to help the ghost but in the process, Mr Blackwood (who can also see ghosts) realizes Jane’s talent and tries to recruit her to the Society. Jane wants nothing to do with them (believing they are cruel to ghosts) and flees the school to become a governess to a certain brooding Mr Rochester. Who is hiding something in the attic. Hmmmm.

Charlotte is busy observing and taking lots of notes all this time.

What follows is the adventures and mis-adventures of the girls as they struggle to find a path for themselves during a time when a woman’s choices were very limited. They are smart and loyal and very brave (although they don’t think of themselves as brave) Like the previous book, there are many asides to the reader, lots of funny commentary and lots of action. There is also a lot of literary references to many famous books which kind of took me by surprise. I did like the previous book more – I think that’s because the characters were actual, historical people and I enjoyed the clever ways the authors stuck with the facts but with a new perspective. Don’t pass on this one though – it’s a lot of fun to read!