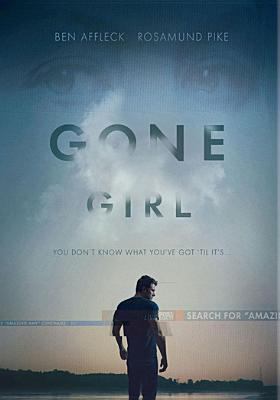 Gone Girl starring Ben Affleck and Rosamund Pike is now available at the library on DVD. Gone Girl is a mystery/thriller set in present day Missouri. The movie begins on the morning of the 5th wedding anniversary of Nick and Amy Dunne. Nick leaves for work, but returns home soon after at the urging of a concerned neighbor. Nick finds signs of a struggle and Amy gone. The movie takes us on a search to find out what happened to Amy. What makes this movie interesting? Many things, but I particularly like that it is told through a dual perspective. On the one hand there is the point of view of present day Nick Dunne while he works with family, friends, and the police to figure out what happened to Amy. Weaved in to the story are entries from Amy’s diary that span back seven years to when Amy and Nick first met. Good luck trying to figure out what is real and who is telling the truth! I promise you the final fifteen minutes will have your head spinning.

Gone Girl was originally released as a Mystery novel by Gillian Flynn in 2012.  Gone Girl is the third novel written by Flynn and the first to see the big screen.  A couple years ago I read this book at the urging of a coworker and I admit I was quite enthralled with it, though not completely  taken with the ending. Watching the movie, I almost wish I hadn’t read the book first because the mystery was now gone. It is hard for me to tell if Gone Girl was just better as a book or if reading the book spoiled the movie. Part of this may fall back on the fact that Gillian Flynn wrote the screenplay to Gone Girl and stays incredibly true to the book. For those of you concerned about how this movie will end, don’t be! The majority of people that I speak to like the way the book/movie ends.

The Verdict: If mystery and thrills is your thing, then make a hold for Gone Girl today! If you haven’t read the book don’t worry as the story stays true to the book! If you have read the book and loved it, watch the movie and let me know what you think!

Fun Fact: Gillian Flynn has written two other novels: Sharp Objects and Dark Places, both of which are being made into movies. Dark Places will be released this year as a made for TV movie and Sharp Objects is still in production.

If you’re looking to start reading Gone Girl by Gillian Flynn today, you might be out of luck (make sure you place a hold!), but that doesn’t mean you have to leave the library empty handed.  Feel free to visit us at the Reference/Information desk, and we can help you find books that read similarly to Gone Girl (or any title that you’re looking to read.)  If you’re looking from home, the catalog can provide read-alike suggestions.  You just need to search for the book, and select “details” to the right of the title and book cover.  Once you are looking at the details about the book, you can scroll down to “Suggestions and More” where you will find similar titles and similar authors.  Here are some suggestions for Gone Girl read-alikes.

The Silent Wife by A.S.A Harrison
How is it like Gone Girl?  Both books are suspenseful, the story alternates between the husband’s and wife’s voices, and highlight marital woes.

Before I Go to Sleep by S.J. Watson
How is it like Gone Girl?  Both books are suspenseful, have complicated plots, and feature discrepancies between what is being said and what is actually happening.

Defending Jacob by William Landay
How is it like Gone Girl?  Both books focus on crime and family, with nimble and smart writing.

The Dinner by Herman Koch
How is it like Gone Girl?  Both books are suspenseful, darkly funny, and feature unlikable and unreliable narrators.

Die for You by Lisa Unger
How is it like Gone Girl?  Both books are psychological suspense novels that evolve from different perspectives.