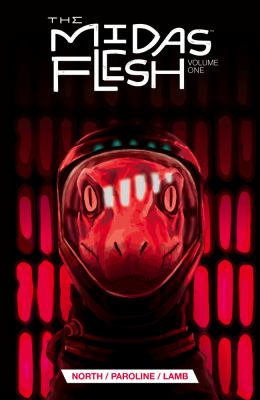 The Midas Flesh: Volume One is an entertaining journey into the future, where a space crew finds themselves within the orbit of a gold gilded Earth. Flashback to how this whole shindig got started. Do you know the story of King Midas? The Midas Touch? That’s basically the gist of this book with some high-tech space flight and dinosaurs in space suits involved.

In The Midas Flesh: Volume One, one night King Midas got drunk and decided that if he had only one wish, it would be to have everything that he touched turn to gold. Low and behold a thunderbolt slashes out of the heavens and his wish is granted. Flash forward quite a bit and the entire planet Midas was inhabiting has turned to gold, BUT the kicker is that it does not show up on ANY of the space maps nor is it in any of the galaxy records. The Federation has covered up the entire existence of this planet and to prevent others from stealing anything from said planet, they have effectively covered its entire close orbit with satellites, ships, weaponry, etc. to alert them if someone stumbles and finds this place.

Somehow  Joey and her space crew, Fatima and Cooper, have managed to find this planet and are desperately trying to figure out why everything on it is made of gold. They are struggling to do so before the Federation realzies they have found the planet and before a bounty can be placed on their heads for being able to take something off the surface of the planet. Joey’s ultimate goal is to be able to harvest the weapon on this gold planet and somehow reconfigure it to be used against the evil Federation, the group who is tracking them down and the same group who was taking over planets and destroying whole civilizations. This first volume gives readers a good introduction into the Midas legend and also to the forces the crewmembers find themselves up against. If you’re not a fan of graphic novels, and even if you are, I recommend this book as there are few flash backs, the artwork is not overwhelming, and the overall story reads like a linear piece of fiction, but the graphic novel as a whole is still widely appealing. Check it out.