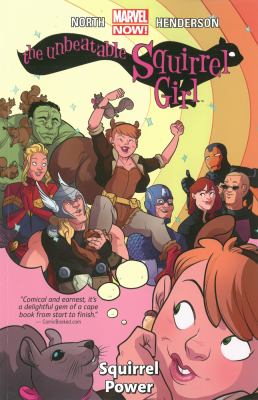 I’m forever looking for graphic novels beyond the usual scope of muscle-bound, male-centered superheroes out to save the world. With the influx recently of all things Deadpool related and then subsequently all things Batman vs. Superman related, I needed a comic palette cleanser. My dilemma quickly fixed itself when I found copies of The Unbeatable Squirrel Girl: Volume 1, Squirrel Power on the shelves(I’m in the midst of reading volume 2, as volume 1 quickly caught my attention).

The Unbeatable Squirrel Girl: Volume 1, Squirrel Power introduces readers to Squirrel Girl, a very upbeat superhero who just happens to have partial squirrel blood running through her veins. If the thought of having to introduce yourself to yet another new superhero sounds a bit daunting, never fear! Squirrel Girl was actually introduced to the world in 1992 with her current creators paying homage to her previous comic book life by including Marvel Super-Heroes vol. 2 #8 as the very last issue in this trade paperback. Readers are given a look inot how the original creators envisioned Squirrel Girl and are also privy to the previous art styles and drawings of characters like Iron Man and Doctor Doom, since Squirrel Girl is out seeking a partner. Current creators, North and Henderson, are sure to reference back to her origins throughout their new reiteration of Squirrel Girl, talking about her first encounters with Iron Man as she is currently involved in new hijinks.

The Unbeatable Squirrel Girl: Volume 1, Squirrel Power follows Doreen Green, Squirrel Girl’s alter-ego, an alter-ego she adapts so that she can become a regular college student. If you’re looking for more background information about Squirrel Girl, she kindly provides that for you within the first few pages of this book by singing her theme song (Wondering what tune it’s sung to? It’s the Spider-Man theme song!) Squirrel Girl has the proportional strength and speed of a squirrel and, of course, the giant squirrel tail that she has to tuck into her pants in order to appear normal. Doreen is trying to balance school, boys, dorm life with her roommate Nancy and Nancy’s cat Mew, battles with super villains, and the fact that she can both talk to squirrels and they can understand her. This first volume is a fun introduction to an incredibly upbeat and dynamic female superhero who is struggling to find her place between two very different worlds.

Bad Behavior has blocked 1317 access attempts in the last 7 days.