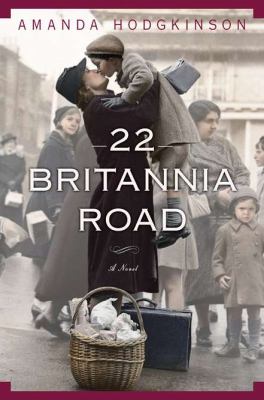 I have been reading a lot of World War II fiction recently, purely by chance. 22 Britannia Road by Amanda Hodgkinson fit so neatly into the timeline of a previous WWII book that I had read that I noticed myself mixing storylines. Once I realized, I paid more attention and started taking notes (Taking notes is more than okay to do! Even when you’re not in school.) This novel was enjoyable and I found myself connecting to most of the characters.

22 Britannia Road tells the story of a family’s rediscovery of each other after World War II. Silvana and Janusz were married right around the beginning of the war. Their marriage began sweet and full of promise with each other’s past left fully in the past. Silvana’s family was less than caring about her, while Janusz is very close to his. Silvana and Janusz settle in Warsaw where they work at keeping their marriage together. Janusz leaves Silvana and their young son to join the military. Years pass, both during the war and after the war, with Silvana and Janusz doing whatever they have to in order to survive.

Once reunited the family moves to England where they struggle to put the past behind them. Both Sylvana and Janusz have secrets though, plus the area where they are living brings its own issues to the surface. Janusz has very much adapted to the English way of life, while Sylvana and their son still mostly speak Polish and have troubles adapting to their new normal life. Settling into their new house, Sylvana and Janusz begin a tentative new life, rediscovering each other and their new home after the ravages of war. Each of them carry secrets that even before they are voiced begin to eat away at Silvana and Janusz inside. What did Janusz do those six years that he was gone? Where did Sylvana and their child end up? How did they survive?

This novel juxtaposes both the present day and the past to show what happened to Silvana, Janusz, and their son during the time when they all were separated from each other. I greatly enjoyed the flashbacks because it helped me to justify and see some of the reasons that each family member behaves the way that they do. This psychological fiction really had me thinking about the secrets we keep from the people we love and the secrets that we’ve become so accustomed to that they eventually feel like our normal life.