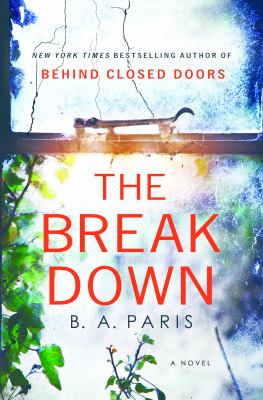 When I was working on my ordering, I stumbled upon the name: B. A. Paris. For some reason, I thought she was a well established author already and decided to give her newest book a try. Later when I began listening to said book, I looked her up on Fantastic Fiction, one of my favorite author websites. Low and behold, Paris was not an established author! Her first book, Behind Closed Doors, had only been released in 2016. I’m glad that I decided to pick up her newest book, The Breakdown, on a whim and give it a listen. Try it. You won’t be disappointed.

The Breakdown is Paris’ second novel. In this thrilling piece of suspense fiction, Paris searches for the truth around a murder investigation. Cass is a school teacher on her way home from work, itching to begin her much needed summer break. A major storm has hit her area making her drive home more treacherous than it usually is. There’s a shortcut between her school and her house that she usually takes, much to her husband’s chagrin. Calling him before she leaves, her husband tells her not to take the shortcut because even on a clear weather day, that isolated wooded road is difficult to drive on. Taking a major road on the way home, Cass is almost run off the road and makes the split-second decision to take the short-cut home.

Almost home, Cass sees a stalled vehicle pulled over on the side of the road. She stops to help, but the weather picks up and Cass decides to leave and call the authorities when she gets home to alert them of the stalled vehicle. The next morning, the news reveals that the stranded driver had been brutally murdered the night before. Cass is immediately thrown into great turmoil. When she drove by, the driver was still alive and according to the timeline released by the authorities, was killed most likely right after Cass left for home. Did she see who did it? Was the murderer in the car? If Cass would have exited her car to help the driver, would the driver have been saved or would Cass have been murdered as well? Should she call the police and let them know she saw the driver? What should she do? These questions and so much more race through Cass’s mind all day and night. Her life becomes consumed by guilt and the nagging thought that she failed and could have saved the driver.

Add in the fact that Cass’s memories are starting to fade, Cass begins to immediately doubt herself.  Her mother suffered from dementia and Cass is worried that she has it as well. Cass’s worries about her health and her massive guilt over not stopping to help the stranded driver exacerbate her confusion. She starts to forget way more things than usual. Cass mixes up dates, forgets purchasing things, and becomes increasingly paranoid. Her worry over the driver ratchets up several notches when she starts receiving silent phone calls that she is convinced are from the murderer. Her husband and best friend are very supportive, however, and Cass finds herself relying on them more than usual to get through this turmoil. If only the two got along better, then Cass’s life would be even easier. Nevertheless, she knows that they will stick by her and support her as she works through her issues.

This book was riveting and had all the necessary crazy, psychological twists that I love in suspense thrillers. Each character is very well-developed and fits neatly into this intensely twisty, clever, and engrossing plot. I was definitely caught off guard when the twist happened, so much so that when I finished this book, I immediately put B.A. Paris’ other novel on hold!

Bad Behavior has blocked 1454 access attempts in the last 7 days.