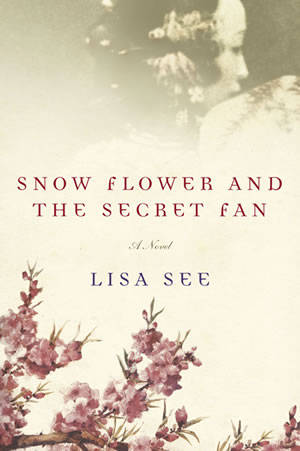 In today’s  world the main character in Snow Flower and the Secret Fan would perhaps be categorized simply as a “senior citizen”. In Lily’s unforgiving world at 80 she is known as “the one who has not yet died”. Pretty telling about how the elderly and or women are portrayed in this story. Lily tells her challenging life story and what it was like growing up female in a 19th century Chinese village. Women in particular at this time lived excruciatingly difficult lives. Their feet were bound rendering them all but crippled yet was neccessary to procure a husband. They were married off and forced to take the position of lowliest person in the household. Essentially, women were deemed responsible for anything that was bad or went wrong in their culture. Although their customs, folklore and traditions were fascinating, this was a difficult read at times.

I was amazed at how these women managed to survive such physical and emotional hardships. A beautiful way in which they escaped was through the ancient art of women’s writing called nu shu. Some young girls participated in a sort of arranged friendship called laotongs through which they communicated in this secretive fashion – writing on fans, in letters or embroidering handkerchiefs. Snow Flower and Lily had just  such a relationship in which their remarkable lives are chronicled through their nu shu correspondence.