Have you been over to the Figge Museum yet to see Mural by Jackson Pollock? The masterpiece is currently on display through December 31 as part of the exhibit titled A Legacy for Iowa: Pollock’s Mural and Modern Masterworks from the University of Iowa Museum of Art (which also includes works by Picasso, Matisse and Chagall). I’m not sure if it is the size, the intense strokes of color or just some unnameable aura, but this painting has always had the ability to weaken my knees and completely clear my head (This may explain why the museum always keeps the Eames lounge chairs nearby!). After taking in the painting for a few minutes or so, I suddenly find myself actively easedropping on the other viewers: “Look for cigarette ash!” or “I think it looks like dancing.” or “I read in the Smithsonian that Pollock spelled out his name.” or “I could paint that!” to which I often say in my head “But you didn’t!” Here are several movies related to Pollock and his work:

The University of Iowa’s Mural plays a prominent role in Pollock, a biopic of Jackson Pollock starring Ed Harris–the film includes a very intense scene where Pollock paints Mural in one feverish night before he presents it to famous art collector/patron, Peggy Guggenheim (who offered the painting to the University of Iowa in 1948). 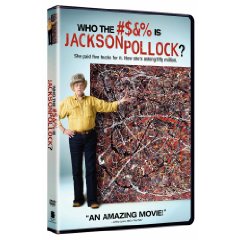 Imagine having something in your possession that is either worth over $100 million or less than $5 and no one can tell you which. Who the #$&% is Jackson Pollock? tells the story of a woman, Teri Horton, who bought a cheap painting in a thrift shop only to have someone tell her that it could be an unknown work by Jackson Pollock. What intrigued me most about this movie was that upon seeing Teri’s painting, I had a very strong, persistent feeling that it was NOT done by Jackson Pollock despite the evidence presented. I had expected to be easily convinced. 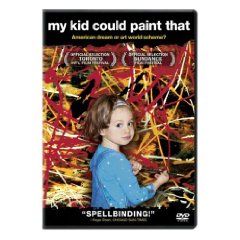 My Kid Could Paint That is a documentary on kid painter Marla Olmstead and the controversy surrounding the authenticity of her paintings. At the heart of this movie is the question: What makes art, Art? the artist? the work? the idea? or the price it will fetch at an auction?

Bad Behavior has blocked 1528 access attempts in the last 7 days.