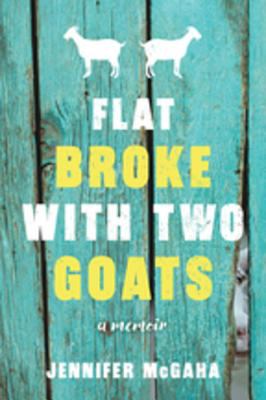 This book title, Flat Broke with Two Goats, is one of the catchiest I’ve seen in a while. In this memoir, MaGaha finds herself in foreclosure due to self-admitted willful ignorance of the family finances, which her accountant husband oversaw. My favorite part of the book was the author’s move to Macomb, Illinois to teach at “the University”. I had visited a college friend at Western Illinois University in Macomb decades ago, and more recently spent the day there attending a business meeting for a different job so I was a bit familiar with the place. This section of the book was a bit like a mild version of Eat Pray Love, only with cornfields, a boxcar, and sweltering Midwest heat.

At times I found the author annoying in her unwillingness to take responsibility for her actions and for not thoroughly researching the care and feeding of her animals. I also would have found the cabin less disappointing and more potentially exciting. All of those acres of natural timber and a beautiful waterfall view? Sign me up! Sure, the house was a dump and there were poisonous snakes and wolf spiders, but the couple made the house hospitable with some improvements. As for the critters, I admit I would be treading carefully and somewhat anxiously because of the snakes, but I already deal with wolf spiders in my neck of the woods.

The couple went on to raise chickens and goats and slowly transformed from people who lived beyond their means into rural farm people living a simpler life. I liked how she found making yogurt and soap fulfilling. She realized she’s gone back to some of the practices of her ancestors on these same lands, minus the constant backbreaking work and potential to go hungry with a crop failure. I give MaGaha props for bravery in being brutally honest about her life, which must have been difficult. She’s an accomplished freelancer but in looking at her website it appears this was her first published book. I think she will continue to find maturity in her novel-writing voice with subsequent books. 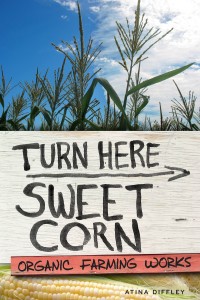 When the hail starts to fall, Atina Diffley doesn’t compare it to golf balls. She’s a farmer. It’s “as big as a B-size potato.” As her bombarded land turns white, she and her husband Martin huddle under a blanket and reminisce: the one-hundred-mile-per-hour winds; the eleven-inch rainfall (“that broccoli turned out gorgeous”); the hail disaster of 1977. The romance of farming washed away a long time ago, but the love? Never. In telling her story of working the land, coaxing good food from the fertile soil, Atina Diffley reminds us of an ultimate truth: we live in relationships—with the earth, plants and animals, families and communities.

A memoir of making these essential relationships work in the face of challenges as natural as weather and as unnatural as corporate politics, Turn Here, Sweet Corn is a firsthand history of getting in at the “ground level” of organic farming. One of the first certified organic produce farms in the Midwest, the Diffleys’ Gardens of Eagan helped to usher in a new kind of green revolution in the heart of America’s farmland, supplying their roadside stand and a growing number of local food co-ops. This is a story of a world transformed—and reclaimed—one square acre at a time.

And yet, after surviving punishing storms and the devastating loss of fifth-generation Diffley family land to suburban development, the Diffleys faced the ultimate challenge: the threat of eminent domain for a crude oil pipeline proposed by one of the largest privately owned companies in the world, notorious polluters Koch Industries. As Atina Diffley tells her David-versus-Goliath tale, she gives readers everything from expert instruction in organic farming to an entrepreneur’s manual on how to grow a business to a legal thriller about battling corporate arrogance to a love story about a single mother falling for a good, big-hearted man. (description from publisher) 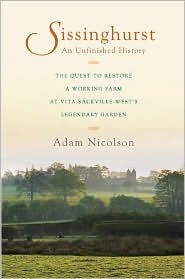 To be  honest, I only planned to skim this book when I picked it up, expecting  that it would be rather dry and academic. Instead Sissinghurst: an Unfinished History by Adam Nicolson turned out to be a fascinating, beautifully written history of a remarkable landscape.

To any gardener worth their compost, the name Sissinghurst is instantly recognizable as the site of one of the most beloved gardens in England. It’s gardens, especially the famous White Garden, continue to influence and inspire gardeners today, 70 years after it was created. Sissinghurst was also the home of one of Englands most famous literary couples (and the creators of the gardens), Harold Nicolson and Vita Sackville-West. Now owned and managed by the National Trust, Adam Nicolson (Harold and Vita’s grandson) wished to bring the land surrounding the castle and gardens back to their earlier incarnation as a working farm with all that that involved – an integrated system of meadows, grain, crops, fruit, vegetables and livestock as well as managed woodlands. It was a landscape that encouraged diversity, sheltered wildlife and sustained a strong community.

Nicolson covers the wide-ranging history of the estate, how the land shaped the people that lived there and how people shaped the land. Nicolson’s proposal to return parts of Sissinghurst to farm initially met with resistence that surprised him and had to be addressed. Through it all, his fond memories of growing up on the estate beautifully illustrate both the beauty of and his love for the land, it’s history and it’s people.