Star Wars: A New Hope  is turning 40 this year, so while it’s exciting to look forward to the latest movie, coming out, it’s also fun to revisit the one that started it all. One book that’s made that especially fun is Star Wars: From a Certain Point of View. It’s glorified fanfiction, but it’s by some great authors, some who have already written extensively in the Star Wars universe, others who are better known for work in several genres. The results span genres from short stories, to incident reports, to epic poems, and are often funny and occasionally devastating.

The stories start at the beginning of A New Hope, and follow various cover rebels, Jedi, storm troopers, cantina band members, and family members – fleshing out characters that are often little more than a line of dialogue in the movie.

I was initially excited about this book because it features some of my favorite authors. Nnedi Okorafor has been promoting her story, “The Baptist,” about the backstory of the trash compactor monster. Okorafor takes her character seriously, and it works, following the creature as she’s captured on her home planet and taken to the Death Star, where she’s forced to examine her life and  and how she examine her life and her role in the universe.

Other stories look at the ridiculous aspects of living in the Star Wars universe. Mallory Ortberg’s “An Incident Report” follows how difficult it is when your coworker forces his religion down your throat. In general, I liked the Empire points of view best, probably because they often focused on office politics and being frustrated at work , such as “The Sith of Datawork” by Ken Liu looks at the paperwork required to cover up a missing shuttle, or “Born in a Storm” by Daniel José Older,  about a stormtrooper who knows he’d make an amazing dewback rider.

Some other stories I especially liked were “Not for Nothing” by Mur Lafferty, a chapter from a tell all rock in roll memoir of one of the cantina band members, and Kieron Gillen’s “The Trigger” even if it is probably cheating (it features Dr Aphra, an black market archaeologist he created for the Darth Vader comics, but she’s one of my favorites, even if she’s not from the movie, so I’m glad he snuck her in.)

The book is arranged chronologically through Star Wars: A New Hope,  so while I initially skipped around to see what Meg Cabot aproached a Star Wars story, or what Wil Wheaton might be like as a writer, I also enjoyed going back to the beginning and seeing how people imagined the backstories scene by scene. The stories don’t build on each other, so if you are familiar with the movie, you can read as many or as few as you like in any order, and they still work.

It’s fun to imagine all the stories behind Episode IV and to see glimpses of Luke, Leia and Han as side characters in someone else’s grand drama. If you are planning on rewatching the film, I would definitely recommend checking this book out first.

The Library has print copies of Star Wars: From a Certain Point of View, as well as the audiobook available on CD with several readers. 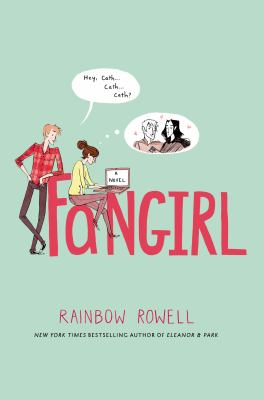 Fangirl focuses on Cath, a teenage girl just graduated from high school preparing to head to her first year of college. Cath is a GIANT Simon Snow fan. While other people love Simon Snow, Cath lives and breathes him. She has spun a new world for Simon through her fanfic website, “Carry On, Simon”. Simon Snow is a character in a magical series that Cath and her identical twin sister, Wren, write about online. Once college starts though, Cath and Wren begin to drift apart.

This first year of college is rough for Cath. She and her sister are going to the same college, but her sister doesn’t want to room with her, a fact that Cath can’t understand. Rooming with Reagan, a much older girl, and somewhat-rooming with Reagan’s ex-boyfriend, Levi, who never seems to leave their dorm room, Cath struggles to find her balance between the real world and the fanfiction world of Simon and Baz. Cath’s relationships with Reagan, Wren, Levi, and her father all add necessary personal touches to this book, allowing readers to draw connections between what Cath writes about in Simon’s world and what is actually happening in Cath’s world during the day-to-day.

This book alternates between sections of the Simon series, sections about Cath’s real life, and sections of various fanfiction(whether it be Cath’s or someone else’s). While all this switching may seem overwhelming, the book actually benefits from the many different points of view. Don’t give up! Stick with it and soon you’ll be sucked into Cath and Simon’s world.

Bad Behavior has blocked 1618 access attempts in the last 7 days.