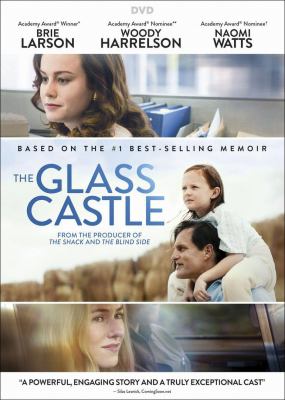 I was hesitant about watching yet another depressing movie about a dysfunctional family but the preview I saw while watching another Lionsgate film was enticing so I gave it a shot.

The Glass Castle is a 2017 movie based on the 2005 memoir by Jeannette Walls. Brie Larson plays the author, Woody Harrelson plays her alcoholic father, Rex, and Naomi Watts is her passive, artist mother, Rose Mary. The family moves constantly due to Rex’s debts and run-ins with the law until they end up in Rex’s home town where a family secret is revealed. Rex and Rose Mary are both highly intelligent so the children end up faring well despite their lack of formal education.

Jennifer Lawrence originally signed on as the lead before becoming too busy. Larson was wonderful in this role so it worked out well. I thought all of the acting was great, including the child actors playing the Walls children at various stages.

It was amazing that young Jeannette Walls had the ability to perceive her household situation with the accuracy of someone far beyond her years. She seemed to be the pillar of the family. Despite all of the turmoil, she was able to finally find the shining moments in an otherwise turbulent family.

Lifestyle blogs are the ‘thing’ right now.  Young House Love, Perfectly Imperfect, Smitten Kitchen, and Pioneer Woman are all written by bloggers who are getting famous simply for letting readers into their homes  (I like to think of them as still life reality stars.)  The best bloggers combine a sharp wit, unique voice, beautiful photos, a glimpse at the personal, and easy to follow how-tos.  Many of these bloggers have published books that you can check out from the Davenport Public Library, so stop by and check them out!

Bad Behavior has blocked 2332 access attempts in the last 7 days.