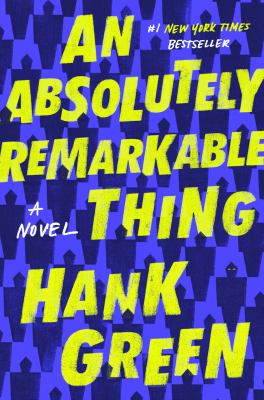 Have you heard of Hank Green? Hank is the brother of prolific young adult author John Green. Hank is a genius in his own right though: cocreator of Crash Course, Vlogbrothers, and SciShow. Hank has branched out into fiction now! In his debut novel, An Absolutely Remarkable Thing, he has created an intriguing story about a young woman somewhat content in her own peaceful life who becomes an overnight celebrity. Her sudden celebrity is part of a much bigger, stranger, and weirder situation that anyone in the world could possibly comprehend.

April May is stumbling home from work in the wee hours of the morning when she runs into a giant sculpture that seems to have just popped up in the middle of the sidewalk out of nowhere. Delighted – and confused – by this discovery, April does the most logical thing that she can think of: she calls her friend Andy, a local vlogger, and guards this sculpture until he comes with his video equipment. April and Andy decide to make a video with this expertly crafted artwork that she has aptly named Carl. Carl is a glorious piece of craftmanship – a 10-foot-tall Transformer-looking sculpture covered in a suit of samurai armor. After shooting this video, they stumble to their respective homes where Andy uploads the video they shot to YouTube.

Events quickly spiral out of control. The next day April wakes up to a very popular viral video and a rapidly changed life. Andy is understandable overwhelmed as he calls April to report that their Carl isn’t the only Carl. Carls have been discovered in dozens of cities all over the world. They all seemed to have popped up at once with no organization or government claiming ownership of their construction or arrival. April is now considered to be the first person to have had contact with a Carl and thus becomes the center of an immensely intense and ever-growing international media spotlight.

Luckily April has some pretty strong friends and family in her corner. (Whether or not she acknowledges their usefulness is another matter altogether.) These individuals have to fight against April’s growing ego as she believes that she is the only person who could possible figure out the Carl situation. After all, she found the first Carl. April struggles to balance her new fame, old and new relationships, her identity, and concerns over her safety as people quickly realize that the Carls are even more not what the public thinks. April tries to put herself at the forefront of Carl research and becomes even more of the face of the Carl movement as people learn more and more facts about the Carls. People all over the world question the Carls’ existences: why, what, who, etc. April and friends soon realize that the Carls may want something from the people of Earth, but figuring this out may tear them all apart for good.

An Absolutely Remarkable Thing by Hank Green is an impressive and surprisingly relevant read when compared with today’s society. This book takes on issues of social media fame, conversations, and calls to arms. It also talks in great detail about how the world in general, and also people at an individual level, deal with change, fear, and the uncertainty that change can bring. I really enjoyed the way that Green builds April from a nobody to an immensely popular celebrity. That juxtaposition between her former and current selves was fascinating as it really showed the dehumanization and other-worldly qualities the general public thrusts on people in the public eye.

I enjoyed this book! Check it out and let me know what you thought about it in the comments below. 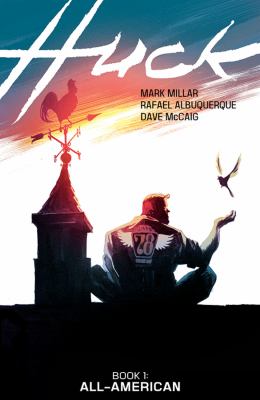 I love superheroes, but lately I’ve been burnt out on spandex superheroes in my own reading. Needing a mental reading break for myself, I scoured the new shelves looking for a hero without a leotard. I found my good ol’ hero in Huck: Book One: All-American.

Huck begins in a quiet seaside town with a large muscled man bouncing around on top of several cars on a busy interstate. He then runs exceedingly fast and dives into the ocean. He lifts heavy objects, finds what he’s looking for, and deposits it on a local woman’s doorstep. With that quick introduction, readers are left wondering who exactly that mysterious person is. That’s Huck.

Huck is a local gas station clerk who uses his special gifts every day to do a good deed for someone. Huck can find anything and anyone. Seriously. It’s one of his gifts, besides super-duper strength and general all-around awesome good guy-ness(Is that a word? I’m making it a word.) Everyone in this small town knows to keep Huck’s good deeds and gifts a secret because he needs to be protected. Seems easy, right? Nope. A new person moves into town and, of course, ruins his anonymity. With this new person blabbing his story to the media, Huck soon finds himself unwillingly famous and hounded at every turn by anyone and everyone. With this fame, people start coming out of the woodwork looking for help, to introduce him to the world, and to solve the mystery of his past. Huck naturally believes the good in all, but to the people in this small town(and to the readers), it quickly becomes obvious that his new friends may not actually be his friends and the people in danger may not really be the ones in danger. Things can actually be too good to be true.

If you want a superhero without spandex or even just a good old feel-good helping story, check out Huck by Millar and let me know what you think!