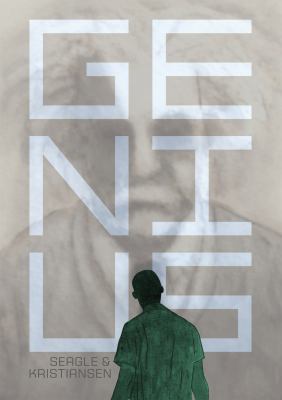 Steven T. Seagle and Teddy Kristiansen’s Genius tells the story of Ted Max, a genius weighed down by expectations and overwhelmed in his interpersonal relationships.  Once a promising quantum physicist, his life seems to have come to a halt.  He cannot think of any new ideas at work and is facing losing his job at a think tank.  His wife has been diagnosed with a life-threatening illness and he doesn’t know how to interact with his budding genius daughter and future frat boy son. And to make matters worse, his crotchety father-in-law won’t tell Ted the secret that Albert Einstein entrusted him with when he was “Bert’s” bodyguard. With no relief in sight, Ted begins to see himself unravel.

There has been a biographical graphic novel trend in publishing the last few years, but despite Albert Einstein’s strong presence in this graphic novel, this is not a biography.  Seagle uses Einstein as a memory or an absence in Ted’s life.  Kristiansen’s absorbing, lush pastel watercolor illustrations  pair well with Seagle’s sparce and straightforward text, and make Einstein’s presence known throughout the novel. There is a sense when you read the book that you’re able to see some of the beautiful inner thoughts of a quantum physicist who has a difficult time voicing his feelings.  I was much more touched by this book than I expected, and really felt Ted’s frustration with trying to live in the present when the future beckons and the past haunts.  Ted many not be an everyman, but I think that most of us struggle with similar worries and heartbreaks.

Bad Behavior has blocked 2328 access attempts in the last 7 days.