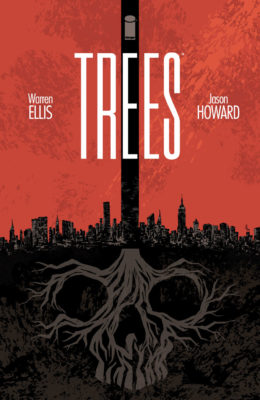 Ten years ago, they arrived. Silently they landed – enormous, tall cylinders settling all over the Earth. No communication, no signs of life. Just standing there, like trees, unaware of humanity, it seemed. Or, perhaps they simply didn’t care.

Their appearance causes global chaos. The Trees landed in oceans, on top of glaciers and the middle of crowded urban centers.  Governments collapsed and then slowly recovered. With no communication or interaction after ten years, the Trees have become almost normal, and humanity has adapted to their existence.

In China, a special cultural zone has been established around a Tree, called Shu, where none of the usual cultural and economic restrictions are enforced. Tian Chenglei, a young artist from the country to study art. He joins an artists commune and shyly makes friends with a transgender woman, eventually falling in love with her. But the freedoms the Tree’s arrival brought cannot last forever.

In the northern-most reaches of Norway’s Spitsbergen island, a scientific team assigned to study the Tree there struggles to maintain order and their sanity. One determined scientist discovers black poppies growing in the shadows around the Tree, areas where nothing should grow. He eventually discovers that the flowers are composed of metal filaments arranged in a mirror image of the Tree’s external symbols, and that they transmit faint RF signals. He reasons that the flowers are a method of communication and once there is enough of them, the Tree will “speak.”

In Somalia, a technocratic dictator deals with the economic and political impact of one of the smallest Trees landing in the autonomous state of Puntland within Somalia. The Tree’s arrivals resulted in a vast influx of wealth and economic growth into Puntland, while the rest of the country only grew poorer. Convinced that the Tree does not care about the land and people around it, Rahim is determined to take control of the Tree and Puntland, by any means necessary.

The Trees changed the world when they arrived. The uncertainly of their intent and the implication of another intelligent species irreparably changed civilization – it was, in fact, the end of the world as we knew it. The story is less about the Trees (although the forthcoming volumes promise more) than how humanity reacts to them.  Ellis (Transmetropolitan, Planetary) has a lot of ground to cover initially, but by end of the first volume, the action and dread intensifies to a cliffhanger of an ending. Trees is a great choice for sci-fi fans and for those who wonder what might happen when we learn we’re not alone in the universe.