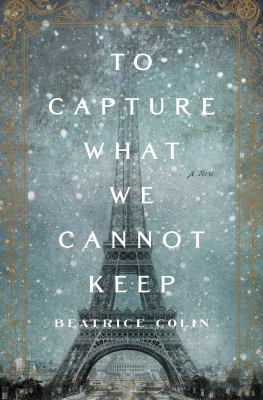 To Capture What We Cannot Keep by Beatrice Colin is, on one hand, a love story between two people from very different circumstances and the obstacles they must overcome, but it is also a story about change, in the world and in ourselves as symbolized by the building of the Eiffel Tower.

Caitriona Wallace is a young Scottish widow, tasked with chaperoning two wealthy young adults on their Grand Tour of Europe. By chance Cait meets Emile Nouguier, one of the designers of the Eiffel Tower, while in Paris. They connect almost immediately, but the friendship seems doomed to end before it begins since Cait and her charges must return to Scotland in a few days. When, several months later Cait is given the opportunity to return to Paris, she seizes it immediately and she and Emile are able to resume their friendship which soon leads to something more.

Of course, it’s not smooth sailing. Emile is from a wealthy family and is expected to marry well. In addition, the demands of his career and the expectations of his family trap him into a role almost as much as Cait’s societal limitations (poor, widowed, female). Times are changing though, as symbolized by the building of the great Tower – not everyone likes it (in fact, most Parisians hated the Eiffel Tower when it was first built), but life and society cannot remain stagnant.

I very much enjoyed this novel for several reasons –  it’s historical setting of the world on the cusp of great change, the story of two people falling in love, the city of Paris in the belle epoch era, and the behind-the-scenes descriptions of the building of the Eiffel Tower.

Built for the 1889 World’s Fair, the Eiffel Tower is a marvel of engineering brilliance. The original plans called for it to be torn down after 20 years, but it was a huge success with the public and soon proved it’s worth as a communications tower and was allowed to remain. It’s now a designated historical site and one of the most recognizable symbols in the world. I’ve been to Paris several times and have visited the Tower each time. There are two things about it that strike you  – it’s much bigger than you imagined, and, especially up close, it’s much more beautiful than you expected. Building codes instituted in the 1970s insure that the Eiffel Tower remains a prominent feature of the Paris skyline, unhindered by modern skyscrapers (the codes also protect the many other historic buildings in Paris, but it’s the Tower that most obviously benefits)

You can read more about Beatrice Colin and her research and writing process for this novel in an interview she did with Bonjour Paris.

Bad Behavior has blocked 1734 access attempts in the last 7 days.