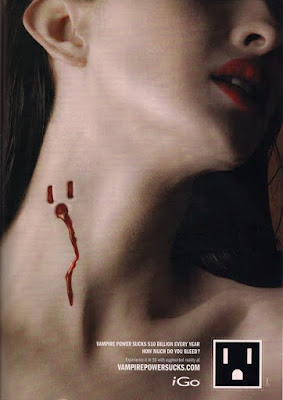 e just handed you a couple hundred bucks around Christmas time, you’d be cool with that, right?

That, apparently, is what you will get if you can work into your routine a daily flip of a common power strip before you go out the door, effectively cutting the energy draw to devices that aren’t in use.  Vampire energy (though obviously a lower amount than when the item is in full-tilt operation) still accumulates, some would say unnecessarily.  That energy goes to keeping the clock illuminated, and having the device in a general state of almost-readiness for you to come use it.  If you’re never going to come use it for a week, then there’s no sense in that, is there?

According to the United States Department of Energy, 75 percent of home electricity for appliances and electronics is consumed while they are turned off.

Use that VCR very much?  If it is plugged in, that’ll run you close to seven dollars this year.  Plasma Televisions, Satellite A/V receivers, are apparently pigs as well.

A device that is getting a lot of press is the Kill-A-Watt, which tells you the draw of individual devices and predicts your bills.

There also are smart power strips which will sense when an appliances are in vampire mode and “stop the bleeding” so to speak.

Bad Behavior has blocked 1134 access attempts in the last 7 days.