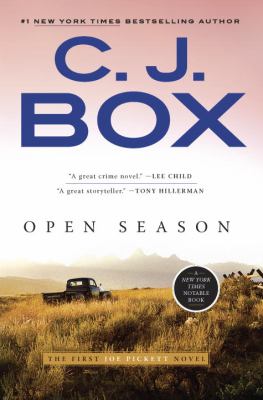 How did your October Challenge reading go this month? The topic of Nature gave us a lot of options – I hope you found one you liked!

I had a good month; I read (and am now hooked on) the Joe Pickett mystery series by C.J. Box. I’ve actually read several in the series (there are 19 so far with number 20 coming out early next year), but I’ll just talk about the first in the series, Open Season.

Joe Pickett is the new game warden in Twelve Sleep, Wyoming near the Bighorn Mountains. It’s beautiful country, teeming with wildlife and natural resources, but it also seems to attract some people who prefer to live outside the law. Unlike his predecessor, Joe refuses to look the other way or accept bribes and that makes him unpopular with the hunters and fishermen who don’t follow the rules. When two outfitters are murdered and a third man dies in Joe’s backyard, the local sheriff decides that the third man killed the first two, them committed suicide and declares the case closed.

However, this just doesn’t add up for Joe and he begins poking around, looking for clues. The secrets and conspiracies he begins to unravel could be catastrophic for some – including himself and his family. Box navigates the various political issues that are part of modern Wyoming (economic, ecological, environmental) with a delicate touch, showing that each viewpoint has valid concerns, but also has radicals that won’t allow compromise. Joe is a man of few words and often gets himself in trouble by his refusal to back down or look away. He adores his wife and daughters and loves the beauty and wildness of the countryside. He isn’t bigger-than-life heroic, but is determined and observant and able to find solutions that others don’t – or won’t – see.

I especially enjoyed Box’s writing style. Descriptive without being flowery, the harsh but beautiful landscape, unforgiving weather and wildlife of Wyoming comes to life vividly – you can almost smell the sagebrush or see the flow of a pronghorn herd racing across the plateau. This ability to put the reader into the physical story reminds me a lot of Tony Hillerman and his mysteries set in the Southwest. I highly recommend the Joe Pickett mystery series – but be careful, you’ll likely get hooked!

Now it’s your turn – what did you read this month? Let us know in the comments!

Bad Behavior has blocked 1332 access attempts in the last 7 days.