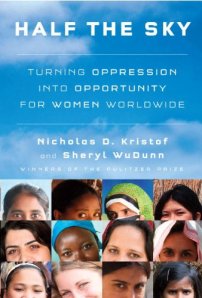 The title of this amazing book, full of incredible stories about women overcoming obstacles, is taken from an old Chinese proverb: “Women hold up half the sky.”  The authors, Nicholas D. Kristof and Sheryl WuDunn, received the Pulitzer Prize in journalism, and I first saw their work featured on the Oprah show.  Their primary premise is that, “Throughout much of the world, the greatest unexploited economic resource is the female half of the population … Unleashing that process globally is not only the right thing to do; it’s also the best strategy for fighting poverty.”

Rather than tire the reader with boring statistics,  the authors wisely chose to illustrate their point by letting us “get to know” individual women.  Warning — the majority of these reports are very sad, even horrific at times, dealing with subjects such as sexual slavery, inequities in gender education, and maternal mortality.  However, each chapter is also followed by a success story, proving time and time again that one person can make a difference.

April 18-24 is National Volunteer Week; I can’t think of a better book to read for it than this.  Besides a plentitude of inspiration, the final chapter gives suggestions on “What You Can Do” with “Four Steps You Can Take in the next Ten Minutes.”  Step One?  Go to GlobalGiving or Kiva and open an account.