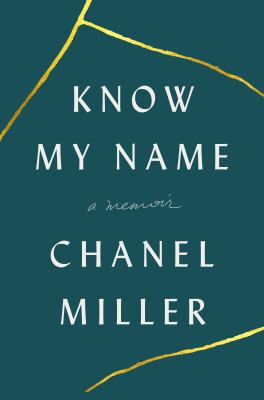 This memoir is not one for the faint of heart. It deals with graphic descriptions of rape and sexual assault and can be triggering to readers. This book also talks about how rape is handled in universities and colleges, as well as how victims are treated within the criminal justice system, by the courts and police, and by the public who, not even knowing the victim’s name, still passed judgements on her actions. I highly recommend you give it a read (or a listen) and let me know your thoughts in the comments.

Know My Name by Chanel Miller tells the story of Emily Doe. Emily became known to the world when her victim impact statement went viral during the sentencing stage of Brock Turner’s trial. Brock had just been sentenced to only six months in county jail after he was found by two bicyclists in the midst of sexually assaulting Emily on Stanford’s campus. Millions read her statement and it was translated into many different languages as the world finally heard from the woman at the center of the case.

After years of being known as Emily Doe, Chanel Miller decided it was time to take control of her story and her name.  She began writing Know My Name as a way to tell the story of her trauma and how she is working to rise above and change the world. Chanel thought that her case was perfect and there was no way her rapist would not be sentenced for a long time. Turner ran away from the crime, there were multiple eyewitnesses, and physical evidence was collected and immediately secured from both her body and the scene.

The aftermath of her rape and the resulting trial threw Chanel down a spiral of isolation and shame. When she realized the oppression and negativity that victims face all the way from the worst to the best cases, Chanel realized that these reactions only make victims coming forward less likely. Throughout this novel, Chanel discusses how this culture is set up to fail and let down victims, but protect the perpetrators. With her family, friends, and attorneys backing her up, Chanel works hard to find herself again and to work through the suffering and intense trauma that are omnipresent.

The Davenport Public Library owns a copy of this book as an audiobook available through OverDrive or through our Libby App. I listened to this book and encourage you readers to seek out an audiobook version as Chanel is the narrator. Hearing her break down while reading certain parts of this book brought me back to when this story was all over the news and shed new light onto what Chanel was actually going through.

Bad Behavior has blocked 1761 access attempts in the last 7 days.