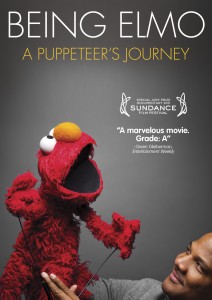 Being Elmo: A Puppeteer’s Journey is the fantastic new film that celebrates the determination and talent of puppeteer Kevin Clash, aka, the man who turned a furry red monster into the loving & curious Elmo and then into an International Icon. While the rest of us were watching Sesame Street to learn our colors and letters, Kevin was studying the Muppets and how they were made. One day, he snuck into his parents’ room and ripped out his dad’s furry raincoat lining to make a monkey puppet. From that moment on, puppetry became his passion and working for the Muppet studios became his goal. How driven was Kevin? Well, he was invited to play Cookie Monster in the Macy’s Thanksgiving Parade while he was still in High School! Whaaaat? That’s crazy! And yet, Kevin Clash’s genius is very humbled. He still sounds slightly awestruck as he gives the cameras a tour of the Muppet Studios (despite currently being the Sesame Street’s Senior Puppet Coordinator and Muppet Captain as well as Sesame Workshop’s Senior Creative Consultant) and tells a great story about repeatedly forgetting his line while working on his first project with Frank Oz and Jim Henson. He is also not afraid to be honest about how his demanding job has affected his family life and time spent with his teenage daughter. I just really want to give him and everyone else a hug now.

Now, I know some people roll their eyes when they hear the voice of little sweet Elmo and so the thought of watching a whole documentary about Elmo is making them cringe. But I am feeling pretty confident that anyone who watches this movie will develop at least a little soft spot for the lovable red monster after watching Kevin hang out with Make-a-Wish kids and explain his reasoning behind why Elmo gives so many hugs. This is an amazing film for all ages of Muppet fans, but also for any fans of the creative, hardworking human spirit. And remember: Elmo loves you!