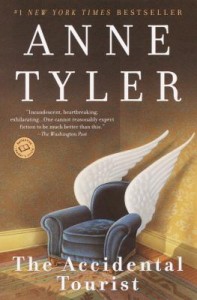 If you’re waiting for the new Anne Tyler, A Spool of Blue Thread, why not dip into the Tyler archive? Old friends like the charmingly odd Leary family are the center of The Accidental Tourist.

Macon, the travel writer who hates to leave home, moves in with his siblings when he breaks his leg. Macon, along with Rose, Charles and Porter resume their comfortable routines, including a card game so intricate only the three brothers and sister can master it.

Written in 1985, the absence of cell phones and answering machines allow Macon to leave his marital home and go off the grid. The Learys often ignore the ringing landline, so those looking for Macon are forced to show up at the door.

Air travel prior to 9/11 is also charmingly free of TSA regulations. Macon writes a series of books for the business traveler, and the chief goal is to replicate one’s home environment. His desire for order and quiet set him up for a collision with Muriel, who is a dog trainer, among other things.  She’s Macon’s equal in eccentricity – but on the other end of the spectrum. She’s outgoing and confessional, with considerably fewer boundaries than the Learys.

Though the tone is sometimes comic, there’s an undertone of sadness and complexity. In the recent past, Macon’s son was killed in a shoot-out at a fast food restaurant. Muriel has had to struggle all her adult life to patch together a life for herself and her young son.

Tyler’s gift is to create fascinating characters and then let them bounce off each other in unpredictable ways.