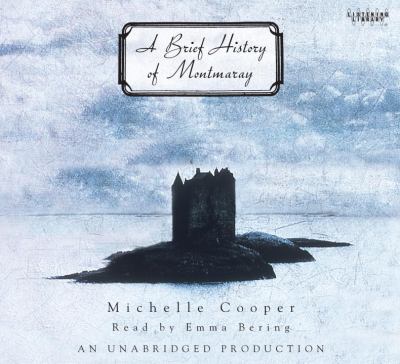 It turns out there’s a cult following of Michelle Cooper’s Montmaray Journals series.  Now, I’m one of them.  The audio version of  A Brief History of Montmaray took me across several states (and back).  Sometimes I was so engrossed that I didn’t notice how low the gas gauge was – a lack of attention that can be dangerous on some stretches of South Dakota highway.

It’s written as the secret diary of (Princess) Sophie FitzOsborne,  one of the ruling family of the  island kingdom of Montmaray.

Sophie’s view of herself, and  her  family  evolves as she learns more of the tragedies surrounding her family’s history, including her aunt’s disappearance. The cast of characters include her very eccentric Uncle John (the king), her siblings and cousin – all  with their own obsessions and quirks. There’s a secret language that the cousins have developed – she encodes parts of her diary in this language, in case the book falls in the wrong hands. There are also secret tunnels, the possibility that the crumbling castle may have connections to the Holy Grail, a jeweled egg gifted by the Romanovs, and perilous rescues and invasions by sea and air.

It is 1936, and world events are overtaking the seclusion of the tiny country in the waters off the coasts of France and Spain,  in the Bay of Biscay. The remaining FitzOsbornes are very aware of the political turmoil in Europe, especially the Spanish Civil War and rising fascism in Germany.  German soldiers land on the shores of Montmaray one day, as part of the historical/archaeological research wing of the Nazis, and life is never the same again.

At the end of the first volume, there are still many mysteries to be solved.  I can’t wait to hear more from this charmingly eccentric family.

Bad Behavior has blocked 1403 access attempts in the last 7 days.