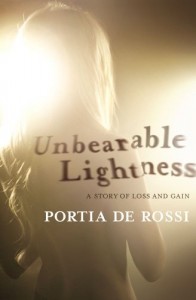 As a big fan of Arrested Development and actress Portia de Rossi, I had to be first to check out her new book, Unbearable Lightness.  Though de Rossi is a very talented comedic actress, this book is a truly sad story:  it details the eating disorder she suffered from since the age of 12 when she began her modeling career.  Starting with a yo-yo diet that included binging and purging before photo shoots and acting jobs, de Rossi eventually became severely anorexic, eating less than 300 calories a day in order to lose weight and maintain her career.    Despite the protests of her family and the fact that she at one time weighed only 82 pounds, de Rossi only saw herself as a chubby girl with big thighs and rolls on her stomach.

This book was extremely shocking and really opens your eyes to what the mindset of an anorexic person is really like. De Rossi does a great job of letting the reader really get inside her head to understand why she treated her body the way she did.  The pressures of staying thin in order to get jobs and being a closeted lesbian in an industry that didn’t accept gay actors really exacerbated her condition and forced her into a downward spiral of self-loathing.  This book is also incredibly eye-opening into Hollywood life.  Knowing how common the pressures de Rossi faced are, I can’t say I ever want to look at another fashion magazine again.  Though she came out of this ordeal alive and has a very happy life with wife Ellen Degeneres, this isn’t the case for everyone who goes through anorexia and bulimia.  Not only is this book very informative, it’s also an emotional and inspirational story about overcoming your personal demons, and  I highly recommend it to anyone.