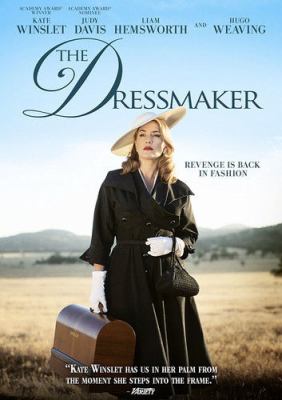 The Dressmaker, starring Kate Winslet and Liam Hemsworth, tells the story of Tilly Dunnage, played by Kate Winslet. This movie is based on the novel of the same name by Rosalie Ham. Tilly is an accomplished dressmaker who spent years traveling the world learning her trade. She has returned to her small Australian hometown in 1950s Australia. Tilly escaped from this town when she was young after being accused of murdering a young boy. She has returned to learn the truth.

Upon arriving back in town, Tilly finds her eccentric mother, played by Judy Davis, living in squalor. She begins taking care of her and scheming to get revenge on those who accused her of murder. Tilly’s way of dressing shocks the town. She begins to offer her dressmaking services to women in town, seemingly as a kindness, but really as a way of revenge. She begins working with the local sergeant, a man who has secrets of his own. Tilly also falls for a local farmer, Teddy, a man who lives next door to her mother and whose family has been stopping in to care for her mother while she’s been gone.

This small backwoods Australian town is rife with secrets and scandals, more than just Tilly’s exile for the supposed murder of her young classmate. More and more of these secrets are exposed as Tilly works her magic on the local women. This movie shows that nothing is what it seems and that everyone has secrets. Tilly struggles to find out the truth, remember her past, and clear her name. I really enjoyed this movie because Tilly clearly knows how to get revenge on people. While she may appear strong, she also has a lot going on under the surface.