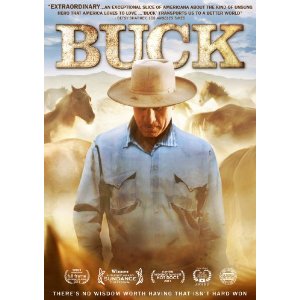 By turns humorous and heart wrenching, the documentary Buck is far more than it  first appears. Sure, it’s about horses and how to treat them, but it’s also about people and facing adversity and being the best person you can, no matter what you’ve faced in the past.

Buck Brannaman (who was the inspiration for and consultant to the movie The Horse Whisperer and even worked as Robert Redford’s stunt double) travels across the country giving workshops on “Natural Horsemanship”, a method of training horses that rejects cruelty and “breaking”, and instead teaches understanding and finding mutual benefits for both horse and rider. People often bring “problem” horses to Buck, horses that refuse to be saddled or follow commands; invariably Buck has the horse calm and obedient within minutes, all done with gentle, persistent direction. Buck points out that most of the time the problem lies with the rider; he doesn’t treat people with horse problems, he treats horses with people problems.

What’s most riveting about Buck though is Buck Brannaman himself. Raised by a tyrannical father that regularly beat and abused him and his brother, Buck has actively chosen to leave that legacy in the past. He has an empathy for horses – and people – that only someone that has known what it’s like to be afraid and helpless can have. He’s found that the way that he’s learned to treat horses – by giving them a chance – bleeds into your life and how you treat your fellow humans. Buck is exactly the kind of person you’d like to invite over for barbeque and a beer – funny and smart and thoughtful, a true modern cowboy. This documentary is beautifully photographed and edited. Buck’s story informs the film, but doesn’t overwhelm it. And despite the past suffering, what you’ll remember and feel is hope for the future.

Bad Behavior has blocked 2292 access attempts in the last 7 days.