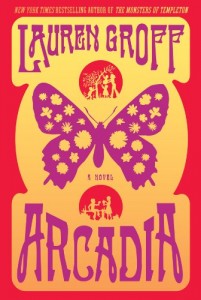 Arcadia by Lauren Groff chronicles the rise and fall of a 1970s commune in upstate New York.  While living in makeshift homes, a group of idealists calling themselves The Free People work together to renovate an old mansion where hundreds could coexist in harmony, sharing equally in manual labor and production of food.  Though it was started by people looking for a life of freedom, equality, and communal living, it becomes clear over time that this utopian society isn’t all that was promised and dreamed of.  People are often just cold and starving, but they keep waiting for life in Arcadia to get better at the encouragement of their charismatic but ultimately hypocritical leader.

We learn about Arcadia through the eyes of a five-year-old boy named Bit, the first child born in the commune.  Bit lives in a bread truck with his hard-working father Abe and his deeply depressed mother Hannah, who was a ray of light in Arcadia until her miscarriage caused her to see Arcadia as it really was.  Despite his age Bit is an astute observer of the good times and bad in Arcadia, and so his childlike lens is perfect for introducing this society.  The story moves through the ups and downs of Arcadia’s history, visiting Bit and catching up on his life and the livelihood of the Arcadians when Bit is 5, 15, 35, and 50 years old.

My favorite thing about this book was Lauren Groff’s lovely prose.  She makes it easy to become fully immersed in the world of Arcadia through the lush detail.  Even the parts of the story that could easily come off sounding like cliches (everyone is vegan, the women wear flowing dresses and braids, plenty of illegal drugs are consumed) somehow transcend this because Groff’s rich writing and realistic characters keep this novel from turning into a series 1970s cliches.

Once I really got into this book, I couldn’t put it down.  The characters were so compelling and real that I just had to know what would happen to Bit, Abe, Hannah, and Arcadia itself.  Though I had a good idea of how things would turn out, the last quarter of the book took me to some unexpected places.  Overall I highly recommend this book, especially if you’re interested in historical fiction or 1970s culture.