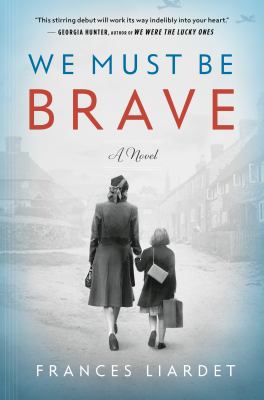 What would you do if you found a child abandoned on a bus? In current times, there are procedures in place for how to handle this. Now travel back to World War II. Imagine you found a small child asleep on the backseat of an empty bus after a mass evacuation from a town miles away that had just been bombed. What would you do now? We Must Be Brave by Frances Liardet tackles this topic and more as civilians in England during World War II struggle to find a new normal.

We Must Be Brave by Frances Liardet begins in December 1940. German bombs are falling on Southampton. In the midst of a massive and chaotic scene, residents are evacuating from the bombed town on buses to rural villages to escape the devastation. Helping to clear one bus in Upton village, Ellen Parr is stunned to find a young girl sleeping in the back of an empty bus, entirely by herself. Picking up the exhausted child and walking through town to search for her mother, Ellen quickly realizes that five-year-old Pamela is utterly alone. Left with no other options, Ellen and her husband take the child and some other refuges home with them.

While the other refuges leave their house in the morning, young Pamela stays. Newly-married Ellen and her husband never thought that they would have children. In fact, they knew that they could never have any biological children of their own, something that Ellen always thought that she was fine with. The addition of Pamela to their home, as well as some other children that the Parrs have taken in, begins to change Ellen’s mind. The longer Pamela stays, the more attached Ellen becomes (Pamela gets attached as well). Ellen starts to think that after the war, Pamela will stay with them and their family will be complete. Once the fighting settles down however, circumstances occur that will once again shatter the quiet idyllic life that the Parrs have created with Pamela. They realize that Pamela was never truly theirs to keep.

Bad Behavior has blocked 1296 access attempts in the last 7 days.