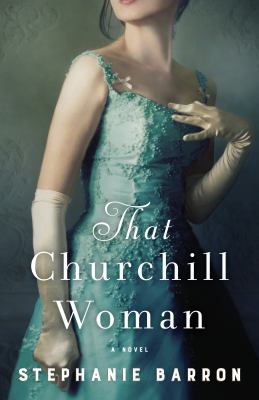 If you could read a book and get a glimpse into another society, would you? By reading fiction books, I will often find a topic that intrigues me that will then push me to read a nonfiction book about the same topic. It’s an enjoyable cycle! Historical fiction is one of the biggest genres that leads me to nonfiction books. I love fact-checking the fiction book to see how closely the author wrote to what happened in real life. Historical fiction that focuses on remarkable women is one of my favorites. Stephanie Barron’s latest works falls under this category.

That Churchill Woman by Stephanie Barron chronicles the life of one of history’s most remarkable, controversial, and influential women: Winston Churchill’s scandalous American mother, Jennie Jerome. Jennie was born in Brooklyn to a prosperous American financier father and a mother with high social ambitions for both herself and her daughters. Eventually ending up in Europe with her mother and siblings after a scandal rocked her parents, Jennie realizes that she is responsible for securing her own destiny. Jennie is wealthy, privileged, and raised by her father to be fiercely independent. The moment she landed in Victorian England, Jennie and her family took the area by storm.

Jennie runs into Lord Randolph Churchill at a party and decides she wants to marry him when she is just nineteen years old. The shocker? They have only known each other for three days when Jennie decides to marry him. Once they are married, she is instantly swept into a crazy whirlwind of British politics and the social climbers that surround Bertie, Prince of Wales. Jennie is now the new Lady Randolph Churchill, a brash American woman who thinks for herself and is careless of English society rules. She becomes a London sensation, traveling without her husband to Marlborough House and gathering admirers and critics along the way. Since Jennie knows about politics and is also a gifted piano player, she uses her talents to begin shaping her husband’s rise in Parliament. Jennie is also widely known as the mother of Winston Churchill. She uses her talents to help navigate Winston’s journey into manhood. He had a difficult childhood, but Jennie made sure to be at his side.

As the Churchill family becomes more influential, scandal and tragedy begin to strike them. Jennie has had lovers besides her husband, but none mean as much to her as Count Charles Kinsky. Kinsky is a man who loves horses like she does  and passionately loves Jennie the way her husband can’t. Once Bertie, Prince of Wales, catches wind of their affair, Jennie is forced to rethink their love as she quickly realizes just how much her every move is judged in public. She must decide how to balance duty and desire, a choice which has consequences that ripple across the Atlantic. Jennie’s decision takes her to a new level of scandal as her children’s lives and all of those around her are greatly affected. This novel is a loving portrait of a woman who helped shape the Churchill era. Jennie’s legacy may be of a difficult and scandalous woman, but the balancing act she works out between obligation, desire, duty, love, and freedom is a testament to the soul of a woman who through sheer force of will was able to alter the course of history.