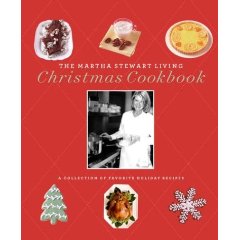 It’s just exactly what you’d expect from Martha and company – traditional recipes presented in fresh ways, exquisite photographs, impeccable directions. The Martha Stewart Living Christmas Cookbook has something for every taste, from simple to extravagant. Recipes cover the gamut of holiday food from breakfast to supper, drinks and hors d’oeuvres to desserts and cookies. A series of themed menus (Italian, Vegetarian, Swedish, Southern Open-House) simplify party planning and tips and techniques are scattered throughout. You’ll find plenty of ideas for the holiday season and beyond.

What would the holidays be without music? Pop one of these CDs in while you’re baking cookies or wrapping gifts – you’ll be humming along in no time.

What a Night: a Christmas Album by Harry Connick Jr

A Swingin’ Christmas by Tony Bennett

Let it Snow by Michael Buble

Once all the presents are bought and candies and cookies have been made, it’ll be time to relax with a good holiday book to keep you in the spirit.

Tom Langdon is a former war reporter who now writes feature articles for various magazines. Banned from flying on airplanes, Langdon is forced to take a cross-country train from Washington, D.C., to L.A., where his girlfriend is waiting to spend Christmas with him. To Tom’s shock, the former love of his life, Eleanor, is also aboard the train. Sparks fly between them, bringing up old feelings along with the unresolved issues from their relationship. Tom realizes this might be his second chance with Eleanor, but a series of unexpected events may derail his plans.

A Christmas Memory is the classic memoir of Truman Capote’s childhood in rural Alabama. Until he was ten years old, Capote lived with distant relatives. This book is an autobiographical story of those years and his frank and fond memories of one of his cousins, Miss Sook Faulk.

Lured by a brochure his doctor gives him after informing him that his emphysema has left him with scarcely a year to live, 52-year-old Oswald T. Campbell abandons wintry Chicago for Lost River, Ala., where he believes he’ll be spending his last Christmas. Befriended by Frances Cleverdon, this quirky story takes a heartwarming turn when Frances and Oswald become involved in the life of Patsy Casey, an abandoned young girl with a crippled leg. As Christmas approaches, the townspeople and neighboring communities rally round shy, sweet Patsy. Flagg is a gifted storyteller who knows how to tug at readers’ heartstrings, winding up her satisfying holiday tale with the requisite Christmas miracle.

Tis the night before Christmas and all through Fontaine’s department store something mysterious and magical is happening. For into the lives of the department store Santa, the harried employees and the worried owner has come a mysterious presence, a silver streak, hiding in the darkened stockrooms and empty stairwells, appearing for an instant – now in the Toy Department, now in an unfinished window display – turning the chaos of a department store on Christmas Eve into a wonderland of miracles.

This intimate family novel by takes place during a few days around Christmas. At an old mill in rural France, philosophy teacher Will, wife Lor, and four nearly grown children reunite for the holidays. The scene and the season are so lovingly detailed that the novel’s atmosphere is almost palpable, yet each family member brings to the festivities some personal trouble that he or she will try to resolve. As they struggle to make this a Christmas to remember, the people and their celebration come alive in an unusual, entertaining, heartwarming evocation of the magic, warmth, and underlying strains of family Christmas.

When TV producer Bobbo Butler tries to save his ailing TV station, FUN-TV, with an American Idol-inspired talent contest intended to find the real Santa, the man himself throws his hat into the ring. Guinn’s clever premise draws on the historical roots of the commercialization of Christmas, and his Santa, who narrates, is sanguine when faced with the prospect of facing off against street corner Santas.

Bad Behavior has blocked 1344 access attempts in the last 7 days.